The steep price of prosperity 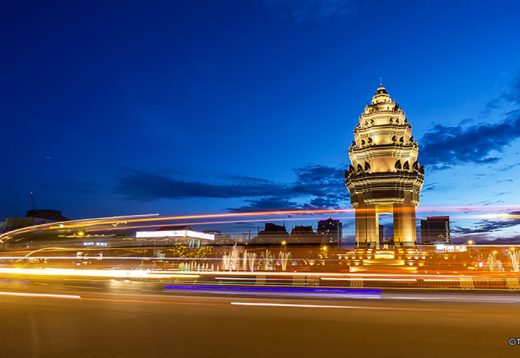 A night view of Independence Monument in downtown Phnom Penh, erected to honor the end of French colonial rule.
B

y all accounts, Phnom Penh is a charming city. Colonial French architecture combined with traditional Khmer influences and modern skyscrapers create an eclectic and pleasing panoramic. A vibrant artistic community mixes easily with the more stodgy business and diplomatic classes. And a sense of optimism pervades everyday life. Residents, both long-timers and newcomers alike, talk about how Cambodia’s best days are ahead of it, how Cambodia will transform itself into a modern country. And Phnom Penh is the epicenter of that transformation.

Phnom Pehn is thriving, but the outlook for the whole of Cambodia remains unclear.

Right in the middle of downtown stands a striking obelisk called Independence Monument. Prominently situated at the intersection of two busy thoroughfares and adjacent to sparkling green gardens and parks, it is a modern reinterpretation of traditional Khmer architecture and can be seen from miles away, reminding everyone in town of Cambodia’s history. Erected in 1958 to commemorate independence from France, the monument has also come to memorialize Cambodia’s war dead, following the brutal rule of the Khmer Rouge.

That the monument has come to have a double meaning is both fitting and dispiriting, for Cambodia’s history has been more painful than any one country deserves. Beset by civil wars, rebellions, and Vietnamese and Thai invasions throughout the early 1800s, Cambodia was looking for peace when it accepted the offer to become a French protectorate in 1863. Having already colonized large swathes of Southeast Asia, the French quickly turned “protection” into colonial control. During their rule, the French invested in the infrastructure of the country, but not in the people, leaving everyday Cambodians with few opportunities for education or advancement.

Unfortunately, Cambodia’s troubles didn’t end after the yoke of colonial rule was finally thrown off in 1953. It soon became embroiled in the Vietnam War, leading the United States to carry out a massive bombing campaign on Cambodian soil. This helped to dry up support for the existing government and allowed a lingering anti-colonial communist force called the Khmer Rouge to coalesce and claim control over larger and larger portions of the country. In April 1975, the government surrendered.

The Khmer Rouge immediately began to purge the population, forcing the abandonment of entire cities, including Phnom Penh, and massacring anyone deemed insufficiently “devoted” to the cause of the revolution. Usually, this meant those with an education. Statistics are hard to come by, but it is estimated that between two and three million citizens died as a result of the Khmer Rouge, representing some 30 percent of Cambodia’s 1975-era population. But even this shocking death toll doesn’t capture the depth of the Khmer Rouge’s depravity. Its rule was characterized by forced labor, separations, beatings, and torture. By all definitions, this was a genocide.

Given this recent history, the current state of the country is all the more remarkable. After gaining its independence and ridding itself of the Khmer Rouge, Cambodia’s development has been impressive and it should be proud of what it has achieved. At the same time, underneath this veneer of forward progress, there are murmurs of discontent, calling into question just how independent Cambodia truly is today.

When you walk around Phnom Penh, you see massive construction projects everywhere and cranes dotting the sky. And if you look a little closer, you notice that they all have Chinese writing on them, betraying the fact that Cambodia’s current development is being funded almost entirely by Beijing and Chinese parastatal companies.

For access to the modern world and technology, they are willing to put up with massive political restrictions and censorship. It’s a trade that that they should not be asked to make, but cannot be blamed for making.

Over the past few years, as part of its Belt Road Initiative, China has funded the construction of numerous hydropower dams, highways, bridges, buildings, ports and other significant infrastructure in Cambodia. All of these investments have made China Cambodia’s largest source of foreign direct investment. Slowly but surely, China is establishing control of critical infrastructure throughout the country. China, a country with imperialistic ambitions, is no doubt angling for control of Cambodia, both economic and political.

As you might imagine, this does not sit well with the people of Cambodia. Discussions with various residents of the city all yield the same lament, “We don’t like the Chinese being here, but we have no other choice”. Translation: “The United States is not investing here, Europe is not investing here, and without Western investment, China is the only game in town.” In fact, the United States and Europe are going in the other direction, decreasing trade and investment access due to the degradation of Cambodian democracy and human rights under the ruling administration of Hun Sen.

Up to this point, this discontent among the people has not translated into a backlash or protests, as we have seen in other countries who grow alarmed by the encroachment of the Chinese. This is partly due to the fact that Hun Sen rules with an iron fist and broaches no dissent. After 35 years as Prime Minister, his grip on power is only growing and his actions becoming more brazen. During the last general election campaign, he openly cracked down on opposition parties and politicians; his own party winning all 125 seats in the national assembly. Under such circumstances, there is no freedom of expression. Criticism of Hun Sen is done in whispers behind closed doors. Anything more risks immediate incarceration.

But there is another narrative at play here. Life is getting better for most Cambodians, particularly for those living in Phnom Penh. Long-time residents describe advances that have raised their quality of life and brought modern conveniences. Poverty is falling and economic growth is high, if a bit uneven. And many have decided that this is all worth the cost of limited political freedom and unlimited Chinese influence. Some in Phnom Penh will even admit that this sentiment runs deep in the city. If they are forced to choose between economics and politics, they choose economics.

If this sounds familiar, it should. This is the exact model that China has bestowed on its own citizens, and which many in China have accepted. For access to the modern world and technology, they are willing to put up with massive political restrictions and censorship. It’s a trade that that they should not be asked to make, but cannot be blamed for making.

It’s no surprise that Cambodia is now following this same trajectory. Hun Sen has formed a close alliance with Beijing and it appears that he is getting more than just investment money from it. Political ideology is no doubt flowing quickly across the border as well, and China is cementing its influence. Where it all leads still remains to be seen.

Independence Monument is a treasure in Phnom Penh. And given the history that it commemorates, particularly what Cambodia has overcome, it is a testament to the grit and resilience of the population in its determination to control its own destiny. One can’t help but wonder if this monument also symbolizes the future of Cambodia. Or if it has given way to a Chinese crane.

— The author wrote this column while visiting Phnom Penh.

Anish Goel is a senior fellow at New America, a foreign policy think tank in Washington, D.C, and previously served in the White House as senior director for South Asia. He is currently an employee of the U.S. Department of Defense. The views expressed in his "Asia Unlimited" column are strictly personal and in no way necessarily reflect those of his employer.