The Stars at Noon 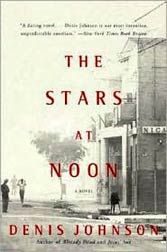 An inferior companion to Joan Didion’s “The Last Thing He Wanted,” but generated a few years earlier, at the height of clandestine U.S. involvement in Nicaragua. Johnson’s ambiguous female narrator calls herself a “humanitarian in Hell,” though her identity — journalist or hooker — is the book’s conundrum. Reading a novelist who prose-poetry tends toward the masculine hijack vaginal space is disconcerting (one of the narrator’s lover has flesh “that bruises at a touch,” another “turns her lungs to gold”). Johnson’s narcotic characters, probed by “the dark world’s innumerable eyes,” are inmates in a sullen, romantic prison. But he gets his geography right: before Iraq, Nicaragua was perdition’s mean departure point.