The Spy Who Came in From the Cold 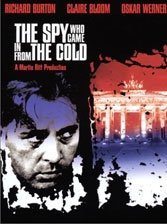 Hard to understate the upstream difficulties of making a downbeat espionage thriller in the halcyon days of James Bond and 007, when girl-and-spy moves were the escapist ritual of choice. Director Martin Ritt succeeds by respecting the grim mood of John Le Carré’s early Cold War novel, in which truth and goodness mean nothing. Gadgetry heavy spy-craft is replaced by a cast of “seedy, squalid bastards” who stare at each other across the Berlin Wall, stuck in amoral dampness that clings to them like glue.

When Godless Alec Leamis (Richard Burton), MI5’s West Berlin station chief, is outfoxed by Communist adversary Mundt, London “control” (devious Cyril Cusack) brings Leamis home and hatches a plan to make him a candidate for defection, hoping to lure the other side into taking the poisoned bait. Burton’s faux-fired Leamis is made to play the part of a cynical drunk who stays in disenchanted character even with his naïve leftist lover Nancy (Claire Danes): “Communists. Capitalists. It’s the innocents who get slaughtered.” Gradually, Leamis’ “inaction and embitterment” grow credible, accelerating the intentions of the other side and lubricating the grand manipulation intended to ensnare and eliminate Mundt.

But this fickle, tricky road runs through Mundt’s sly deputy Fielder (Oscar Werner), and it is the exchanges between Leamis and Fielder that plunge Ritt’s elegant film into darker, murkier ground, all the more because Fielder is a Jew and Mundt an ex-Nazi. Sublimely driven Burton is haunted and hostile throughout, a hollow man at home with gaiety-deprived ruses and red herrings and amenable to the arrogant posturing on which lying hinges (“I reserve the right to be ignorant. That’s the Western way of life.”)

Yet most of Le Carré’s early stories survive on duplicity, and the final moves in this chess match are clever, brutal, and unsparing. “There is only one rule,” says Leamis, “expediency.” Which few involved survive.