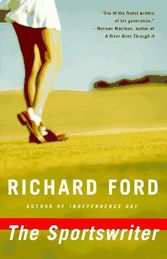 Here’s how Richard Ford gets to you, circling in for the kill: “I know I’m always heartsick in novels … when the novelist makes his clanking, obligatory trip into the Davy Jones locker of the past.” Sometimes, says his frustrated narrator Frank Bascombe, “I close the book and never pick it up again.” But you can’t do that to Frank. He’s just too vivid, too smart; he’s the kind who might call you up at night and ask you what he did wrong. But Frank, a Mississippi-born writer of sports and fiction (not “too much interested” in the former and disparaging of the latter), has in fact done nothing particularly wrong.

His past matters because it’s the discourse of the present. He’s 39 and reluctantly divorced from golf pro “X” (in part because their son Ralph died and deboned the marriage). He has a girlfriend, Vicki, who’s a drawling residue of things lost. Frank now lives alone in the “unprepossessing and unexpectant” landscape of suburban New Jersey. Actually, though, the landscape is expectant, even fraught. If New York City is “lemony glitter,” Frank’s New Jersey has the ample dreariness of rolls of fat — abundant, ridiculous, thick. While Frank insists that life’s mysteries are “unconjugatable” and cuts through his life no faster than an enthralled crab (his image), he’s still doing what all great fictional narrators do: creating a dome under which a population lurks, “the savage wilderness of civil life.”

Ford’s Frank — a little brilliant, a little lost — is a citizen of that opaque wilderness. Ford creates a world of scrimmages and near-occasions, a reverie of possibilities, many played out in Frank’s infinitely curious, abstractly blunt mind. He is aware of “dear gifts from a complex God.” He hazards that “Fast getaways from sinister forces are sometimes essential, though what follows can mean puzzlement.” Frank Bascombe is a vivid contestant in an antique lineup: the storyteller of the day-to-day. And Ford as a writer is a deity of simple beauties. “Dreaminess is, among other things, a state of suspended recognition…” You betcha, Frank.