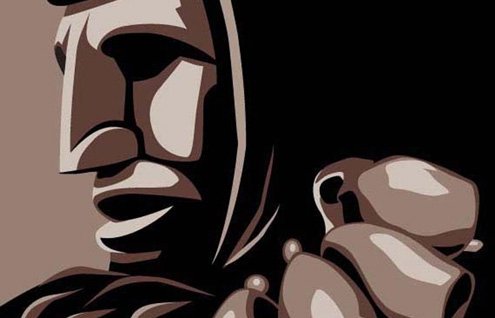 The history and folklore of the Mamuthones at the town's Museo delle Maschere Mediterranee.
A

ll roads in Mamoiada lead to Via Roma, but in a town that ambitiously claims 2,500 residents the options are few. A small alleyway takes us to the social hub of this mountainous Sardinian enclave. There, we find a classic Italian small-town scene: pedestrian traffic, cafés spilling people into the street, Sunday church bells competing with bar TVs showing serie A highlights.

But there’s something else: murals depicting devilish ghoul-eyes.

Fortunately, my student and tour guide, Manuela, had patiently briefed me on the history of Mamoiada’s bizarre annual tradition during the three-hour drive north from Cagliari into the Barbagia region of Ollolai.

Once a year, residents of Mamoiada don menacing black masks dyed from carved wild pear and alder wood (sas viseras), dark sheepskin tunics (sas peddhes), and up to 60 pounds of cowbells (sos sonazzos) strapped around their torsos. The cowbells house the rattling thighbones of sheep. Become Mamuthones, they shuffle through the town’s streets led by herders called Issohadores who guide them out of town by whipping them with lassos (sohas). The lassos are also directed at women in the crowd as part of a fertility omen.

The exact meaning of the annual pre-Christian rite has been lost over time, and the origin of the Mamuthones continues to baffle anthropologists. Roman invaders thought the Mamuthones represented a kind of sacrilegious animal worship, and because it posed a direct threat to the Christianity they tried to spread, they outlawed it. When their repeated attempts to subdue the region failed, they dubbed the area “Barbagia” after the barbarian-like practices of its people.

The most widely-accepted theory is that Mamuthones represent the evil beings from the underworld that haunted the villagers and their ancestors throughout history. The Issohadores are thought to have captured these threatening spirits and driven them out of town in a sort of exorcism. In a post-Christian Barbagia, the ritual has received a Catholic gloss and is now performed on Carnival Sunday in honor of Saint Antonio Abate.

“Oh, and one more thing,” Manuela warned. “If the Issohadore accidentally ropes a man, that man has to buy drinks for everyone he came with, so I hope you brought a lot of money.”

I reach for my wallet as the church bell strikes 2 p.m. After digesting more than 2,000 years of history on an empty stomach, I suggest lunch. During Carnival, the villagers of Mamoiada welcome visitors and serve traditional meals served in their own kitchens, a practice known as “Cortes Apertas.” We enter dimly-lit homes serving homemade acqua vitae grappa, sandwiches made with local boar, and even the odd fried ox testicle before settling on a shot of hazelnut coffee to wash down a wrap of pecorino cheese melted over an open fire in a woman’s living room — a safe choice in a town of shepherds. I lean in to make conversation when a stampede of people passes outside with cameras ready.

“They’re coming!” Manuela says, towing me by the wrist.

A throng of tourists lining the sidewalks jostle for prime viewing position as two elderly men in corduroy jackets and berets restrain the crowd from pouring into the street. We find a hole in the mob and watch as two lines of Mamoiada’s largest men disguised as Mamuthones drag their hunched frames slowly forward. Guiding them in the front and the rear, eight Issohadores skip lightly around the beasts, roping their lassos around unsuspecting females in the crowd and whipping them at the hinds of the Mamuthones, who shudder. In perfect unison, the Mamuthones inch forward before breaking into a harmony of synchronized convulsions with every fifth step. The intensity and violence of the procession brings a group of women beside me to tears.

The participants move from Via Roma to the outskirts of town where a statue of a large granite Mamuthone mask marks the entrance to Mamoiada. The parade suddenly stops. Onlookers applaud as the creatures doff their masks, reveal themselves and double over in exhaustion, gasping for air. I turn my camera from the street to the crowd, but I’ve lost Manuela.

I jostle through the mass looking for a short girl with dark bangs when I am suddenly yanked sideways and pulled through a sea of German tourists towards an Issohadore.

Just then Manuela appears from behind him, turns to the masked herder and smiles, “Grazie.”