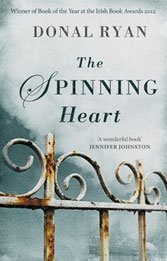 Spain and Ireland were the European countries most stricken by the housing bust that began its strangulating course toward the end of the century’s first decade. Donal Ryan’s fine debut serves as a painful but superbly sensitive X-ray of the Irish hurt. His is a novel is a rounder of narration, beginning with the shattered reflections of Bobby Mahon, a small town foreman who lost his job and benefits to an unscrupulous local builder named Pokey Burke who not only went bust but also scrammed, leaving behind what’s portrayed as “nervy slog of a life” in a country that is “pure solid destroyed.”

Bobby, who’s waiting for his loathed father to die (“… every day he lets me down…”), is one of dozens men and women, all tied together by work or love, that Ryan uses to assemble a jigsaw puzzle of small-town Ireland in pain. There are whores and drunks, the dimwitted and the diligent, united in their ruining lack of cash, marring mortgages, ghost developments, and unemployment. “I just can’t see for the blackness at times,” moans one Seanie Sharper. Irish it is, and melancholy to the core, with Ryan’s supple vernacular bringing his cast to life in concentric rings of local gossip and loud confession. They dared to hope for more and better and now the glass is half-empty — “Where light shines, a shadow is cast…” Ryan’s talent is assembling these voices separately but together as if gathered in a Greek chorus, Bobby’s wife Triona among them: “The air is thick with platitudes around here. We’ll all pull together. We’re a tight-knit community. We’ll all support each other. Oh, really? Will we?” Though decency has its moments, the answer is hardly positive, just as the problems run deeper than the recession itself.

The Tipperary-born Ryan, an Irish civil servant, has constructed a slender but remarkably poignant and assured portrait of a dead-end decade that carries the moral weight of 1,000 woe-riddled news stories. His book won the Guardian best first-novel prize in 2013. It was also published after repeated rejections, again proving the power of perseverance.