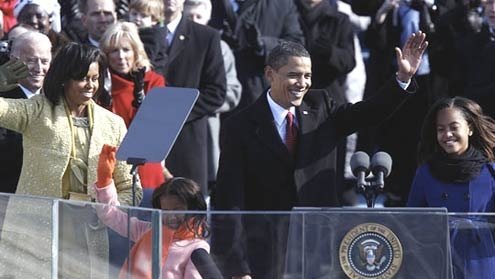 There were many good lines, chromatic yin-yang glistening.
W

hat fine rhetoric this new president summoned. What pretty words he shaped from ice and storm, clouds and courage. Restorative is the word. Listen is what I do not do. I don’t even watch. Instead, I read.

And reading I wonder to myself how wonderful it might be if petty grievances, false promises, recriminations and worn out dogmas were if fact put aside. Set aside childish things, said Barack Obama.

But most adults protect their childish side. Call it mischief or caprice, but petulance is only briefly detoured. Often cosmetically.

Yet his is a fair challenge. Noble even.

The ground has shifted, he said. Old arguments no longer apply. “For the world has changed.” Its new question is apolitical, or non-ideological, “Do things work?” If they don’t, move on, adjust, find other solutions.

This is pragmatism displacing many recent grails. There is no residual communism to fear, greed in its place.

Nor is there false modesty. Not in wartime, though it doesn’t seem like it. “We will not apologize for our way of life,” he said in a line that was neither shy nor intemperate. Appropriate is the word.

There were several strong lines, chrome and yin-yang glistening: “To those who cling to power through corruption and deceit and the silencing of dissent, know that you are on the wrong side of history…” America, as ever, is a history’s peerless friend. Yet to hardline yin he added modest yang’s clever completion… “… we will extend a hand if you are willing to unclench your fist.”

His hope that the “lines of tribe shall soon dissolve…” — postmodern tribute to the global — was no more certain than Sir Edward Grey’s 1914 “The lights are going out all over Europe,” but no less evocative. Europe’s lights did come back on, and brightly, but only after a decade. And the true lines of tribe are deeper and more remote to the the touch than any Youtube balm. The attainment of a “common humanity,” like the setting aside of childish things, is more easily invited than accomplished. Yet the handsome invitation stands on merit.

So does urging a “new age” of responsibility.

The trouble begins with another line, which could have been easily spoken by Pope John Paul II in one of his many speeches warning of materialism’s under-the-cuticle perils. The new spirit, said the new president, must draw upon the willingness of citizens, “to find something greater than themselves.”

The shifting in the ground, however, is at least partly the result of a newfound capacity to turn reflectors not on the world, but on self. Self-expression may be democratic but it’s also vain. Meaning and indulgence collide.

The world gets smaller, some might argue, because its childish side is more easily shared. Where is the deeper meaning in functionality? (“…not whether our government is too big or too small,” he said, “but whether it works.”) How do hungry minds get beyond petty grievances? What unclenches the domestic fist? What gives success its meaning?

Faced with a similar dilemma, FDR hit the gavel harder. He was intentionally more specific: “Happiness lies not in the mere possession of money; it lies in the joy of achievement, in the thrill of creative effort. The joy and moral stimulation of work no longer must be forgotten in the mad chase of evanescent profits. These dark days will be worth all they cost us if they teach us that our true destiny is not to be ministered unto but to minister to ourselves and to our fellow men.”

Words for a still-Boy Scout America, admittedly, and for one whose middle class had yet to know in detail what money could buy. It was easier to tell the poor that having money didn’t stir the drink. The new president updated this logic but toned it down. Nothing was so satisfying to the spirit, so defining to character, he said, “than giving our all to a difficult task.”

It is admittedly, and very literally, a harder sell in 2009 than it was 1933. But old-school Americana, if it is to remain the Americana every president works to sustain, can’t change: “This is the price and promise of citizenship.”

A good speech is both a refreshment and a tonic. It’s an extra helping of sugary spangles on a Sunday sundae. It’s a cathartic Louis Armstrong trumpet solo capped with a grin. Obama’s speech, while far from momentous, suggested a man at home with layered words, keen thoughts, informed modesty, and the prospect of overcoming hardship. It also affirmed any number of eager smiles. That’s anything but a bad start.