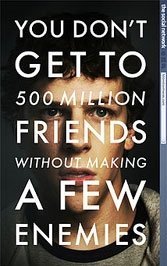 David Fincher’s film begins with Mark Zuckerberg (Jess Eisenberg) telling his girlfriend how much he wants to get into a Harvard Final Club, an undergraduate social club. They argue and break up. In a flash of pride and revenge, he and best friend Eduardo Saverin (Andrew Garfield) hack into databases and rank Harvard women online in terms of desirability. When the prank crashes university servers and is reported in the “Harvard Crimson,” fellow students and identical twins Cameron and Tyler Winklevoss (“I’m six-five, 220 pounds, and there are two of me.”), and business partner Divya Narendra (Max Minghella) see an opportunity to rehabilitate university-punished Mark by working on a website to link Harvard students. Mark agrees but instead schemes bigger things on his own, persuading Eduardo to back the start of a similar site.

What follows is a bittersweet saga of real and would-be industry titans and the business and legal genesis of a site many people now can’t live without. “The Facebook” — its working name — was different from similar sites such as My Space because it was born of Harvard’s elite blood. Fincher throws in just enough insider information (Houses, the Crimson, Head of the Charles, Final Club) to make the story seem like a domestic secret exposed.

But an easy, well-told story about an American genius and his dream also comes with sex, envy and entitlement (“A guy who makes a nice chair doesn’t owe money to everyone who has ever built a chair,” says Mark, fighting off challenges). Modesty is irrelevant. As a lawyer remarks about Bosnia in the movie’s final scene, “They don’t have roads, but they have Facebook.” Bill Gates and Steve Jobs, sons of the 1980s, never got this kind of publicity.