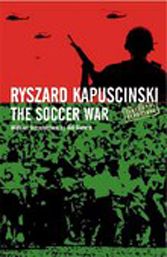 Journalist Kapuscinski’s “pathological lack of discipline” often placed him in harm’s way. In Tanganyika (now Tanzania), he is badly beaten. In Nigeria, he’s almost burned alive. “I had to experience everything for myself,” he writes. Thank God. Take this description of Algiers after Ben Bella’s June 1965 ouster — days before an Afro-Asian conference. “There is going to be a revolt. Nasser is coming. Chou En-Lai is on his way. They’re all coming. Nobody’s coming. They’re arresting the communists. They’re arresting the Egyptians. They’re arresting everybody. It has already started. It starts today. It starts tomorrow. It will start in a week.” The unruly made vivid in staccato bursts.

Between 1960 and 1990, Kapuscinski (who died in 2006) covered Africa, Latin America and the Middle East for the Polish news agency PAP. Tenderly, meticulously, in deceptively simple prose, he communicated the irrational brilliance emanating from the world’s 1960s undercard. In these 22 essay-style dispatches — set in Africa, Honduras (the title work), the Ogaden, and Syria — he surrenders to events but never to bias or the blasé. He mines madness for offbeat riches, particularly in Africa, where globalization is a bad rumor. Of the Algerian army: “This army knows crowd control like the rosary.” Of Mobutu on the military: “It takes one officer and a thousand soldiers to establish a force that has no competition.” While he revels in portraiture — Ghana’s Nkrumah, Sekou Touré of Guinea, and the Congo’s Lumumba and Mobutu — it’s the mundane that ignites his verved intuition. Of Lumumba’s village fans, he writes: “When you talk to these people you can see how everything in their heads is tangled up in the most fantastic way. Refrigerators and poisoned arrows, de Gaulle and Ferhat Abbas, fear of the witch-doctor and wonder at the Sputnik.”

A rabid untangler of unbending compassion (more humanist than socialist), Kapuscinski is a reassuring serum against the skin-deep hysterics of breaking news.