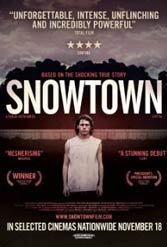 Justin Kurzel’s traumatic debut feature, a fictional account of a gruesome series of Australian murders in the 1990s, behaves like a plague whose insidious symptoms pile up gradually, eventually sickening all in the room.

The story focuses on Jamie (Lucas Pittaway), one of three boys being raised by welfare system mother Elizabeth Harvey (Louise Harris) in the convincingly netherworld suburbs of Adelaide, the capital of south Australia. When she finds that a trusted neighbor has been photographing her sons nude, she turns to God-fearing friends who gather to howl against the spread of local moral decay. The group’s ringleader is bearded John (Daniel Henshall), a bigoted, Rasputin-like figure who despises “diseased pricks” while seeming remarkably friendly. He quietly proposes vile reprisals that few take seriously. John gradually seduces Elizabeth, recruits emotionally undernourished allies, including the reluctant and abused Jamie, and hatches a literally eviscerating plan that’s made all the fiercer by his occasionally jovial demeanor.

The abusive bond linking John and Jamie (Henshall, terrifying, and Pittiway, subjugated) produces a nuanced portrait of psychological and physical sadism that subverts any effort to suspend disbelief. Viewer beware: Few films drill to as dark a core as this one, and even fewer are as pitiless.

Whatever Kurzel’s poetic license, make-believe isn’t in the cards. In 1992, John Justin Bunting and his devotees began a six-year torture and serial killing spree that eventually left 11 dead, most of the victims found stuffed in vats of acid. He is now serving 11 consecutive life sentences, with Jamie Vlassakis serving four.