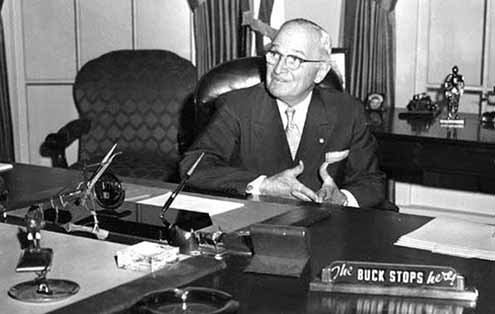 The Truman desk sign came to epitomize a president who spoke his mind, often unadorned.
H

arry Truman had a sign on his Oval Office desk with a folksy bromide about accountability. “The buck stops here,” it read. In Boy Scout argot, that meant the man behind the desk bore ultimate moral and practical responsibility for executive decision-making and its consequences. All blame and excuses should come to rest with him. Truman happened to be the president who ordered the dropping of two atomic bombs on Japan, ending World War II on an apocalyptic note. He also fostered the anti-Communist doctrine that goes by his name and fought a war in Korea as a result. He fired a revered if overly ambitious general during that war. He was a Missouri Democrat with racist leanings who not only kept those sentiments out of his pronouncements but also ordered the desegregation of the U.S. Army. “It is amazing what you can accomplish if you do not care who gets the credit.”

It is just as amazing how ugly things can get if the newest man in that same old office can’t stop blaming others for his own shortcomings.

A month into his four-year term, Donald Trump has so far stood for buck-passing at its dizzying “best.” When challenged, he is never wrong. The fault lies instead with the nattering nabobs of mass media, a constitutionally inclined judiciary, or any number of conniving and disloyal opponents. What he orders but does not get is met with bilious outrage littered with grade school exclamation points. He’s so sincere to his petulance that those who love him come to love him even more by including themselves in his very public temper tantrums. They borrow at will from his erratic indignation.

For the first time in memory, the United States has a president more similar to a boss than a captain. He combines the inflammatory rhetoric of a professional segregationist or old school labor leader with fragile ego of a sealed-off corporate chieftain entirely unaccustomed to dealing with even the slightest criticism.

The buck can’t stop with him because his is right-wrong universe in which all that doesn’t go his way must be someone else’s fault or a personal affront, or both, to avoid a reflecting poorly on decision-maker himself. It’s the anti-Truman and a nearly impossible chip to carry on presidential shoulders. Unless, that is, the boorish disdain of civics is seen as a purifying act. And for Trump’s upside down Bolsheviks it is. To them, the inherent obligation covered by Truman’s desktop quip is obsolete. Poise is a trait for weaklings and losers. Permanent revolution, this time formulated as a reactionary mission, means permanent insults.

Only the hostile and isolated Richard Nixon behaved in similar fashion, though his political experience was expert enough to conceal the worst of it — at least for a while. The insecure Trump has no such experience and has already many times expressed his disdain for politics and politicians, making for ever-steeper irony since he now heads the gaggle of bureaucrats he’s long claimed to loath. The result so far is a bastardized presidency composed of ideologues and yes-men all eager to please, influence or manipulate the tempestuous tsar.

Before the November election, some opponents questioned Trump’s temperamental fitness to hold high office. The comments were swiftly incorporated into the partisan feud that animates the bitter whole of American politics. Fitness, like all else, turned into a red-blue fistfight. Yet the question remains valid.

“Everyone,” Truman once said, “has the right to express what he thinks. That, of course, lets crackpots in. But if you cannot tell a crackpot when you see one, then you ought to be taken in.”

America would be wise to keep a very large ambulance at the ready. Some may in fact need taking in before one year turns to four.