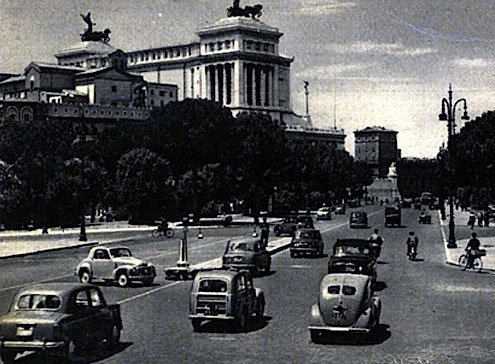 ere, in a nutshell, is the latest from Italy: The head of the country’s business association says the state should better reward those who pay their taxes. Social services are in disarray. What’s the point of taxes, he maintains, if good citizens get so little in return? Law-abiding Italians shoulder the burden of the negligent. And where’s the tax money going? Italy, he says, is a like car that weighs too much. He should know. He’s the president of Fiat.

At the national level, the governing center-left coalition, typically unhinged by internecine strife, tries to escape obsolescence by merging two of its principle parties into a single entity.

The new Partito Democratico will ostensibly align (cranky) Catholic centrists (La Margherita) with (cranky) social democrats (Democratici di Sinistra) in an effort to centralize power and marginalize radical factions. The most likely candidate to lead the new alliance is… the mayor of Rome. Just where all this leaves the incumbent prime minister is unclear.

Meanwhile, former Prime Minister Silvio Berlusconi, in his eternal prime at 72, has also cooked up a frog. His new political movement is called the “Circoli della Liberta” — the Freedom Clubs — and seeks to woo disaffected centrists. The country wants him back, he insists. The sooner the better, he grins. He knows this in his heart of hearts, an organ of plastic sincerity. Only two in 10 Italians support the current government. He is not one of them.

To get from the Rome railway station, known as Termini, to the city’s north end, you’re likely to travel a road called Via Pastrengo that begins near Piazza della Repubblica and zigzags as it nears the Borghese gardens, becoming Via Piemonte. At a crucial point in the journey, cluttered Via Pastrenga intersects busy Via XX Settembre, a chunky artery that funnels westward-bound traffic headed from Via Nomentana to the center. At rush hour, both are ill-tempered links.

There are two reasons. First, narrow Via Pastrengo, a single lane, must cross the wider, more aggressive Via XX Settembre. Second, the timed traffic light at the intersection ignores bottlenecks. But there’s a third ingredient, self-interest, and it mocks the alleged good intentions of technocrats and politicians alike.

When the light turns yellow on the XX Settembre side, vehicles of all kinds butt forward hoping against all logic to cross the intersection — essentially driving into a stacked deck. They know that failing only worsens the snarl, yet can’t resist the millimetric advance. Unconsciously, any advantage gained at anonymous expense is a victory. Given a hostile environment, it’s better to win the useless than to demonstrate weakness. Civics seconded to ego, drivers press ahead.

In New York, the unpleasant maneuver is called “blocking the box” and produces fines. In London and Munich you can lose your license. In Rome, punishment works differently. Irresponsibility and opportunism are possible, even interchangeable, so long as both sides are complicit in creating the inconvenience and each side thinks it stands to gain. Subterfuge is its own reward unless proven otherwise. It rarely is.

Anne Hanley, who writes the stylish introduction to the “Time Out Guide,” calls Rome the “city of eternal chaos.” Romans, she notes astutely, are great moaners. So also are heads of business associations — and mayors, and prime ministers. At home in a pretty glass house, the capital, they pick up stones and hurl them. Yet the impact is minimal.

Everlastingly, deftly, and to its own growing detriment, Italy skims from the common good and moves on.