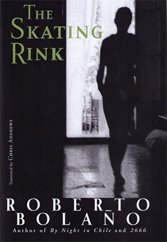 Written in 1992, “The Skating Rink” is a whodunit set in and around a Costa Brava city called only Z. Chilean émigré novelist Remo Morán gives safe haven to downtrodden Mexico City poet friend Gaspar Heridia, making him the night watchman of a campground he owns. Meanwhile, pompous local social services chief Enric Rosquelles falls for local figure skater Nuria Martí, “a tyrannical princess,” and embezzles local funds to build an ice rink in an abandoned Gaudí-styled palace on the outskirts of town.

If fat Enric is smitten by blonde Nuria, it stands to reason that she’s having a torrid affair with Remo Morán. Night watchman Gaspar meanwhile falls for a drug-addled, teen drifter named Caridad, who won’t be seen without a kitchen knife and lives with a delusional, opera-singing vagabond named Carmen.

For Enric, the Remo-Gaspar orbit is composed of “scruffy, damaged individuals, taciturn, sickly misfits.” These are the classic anti-bureaucrats of Bolaño’s dreams.

It reads like a David Lynch amalgam of “A Midsummer Night’s Dream,” “Blue Velvet” and “Hotel California.” When Carmen is stabbed to death at the skating rink, Bolaño’s population of macabre and corrupt people morph into soap opera gargoyles. “I didn’t leave when I should have left,” the killer confesses in the end. But you can’t leave the Bolaño motel. Life, like a character in one of Morán’s novels, “is gradually covered with scars and roughly stitched wounds.”