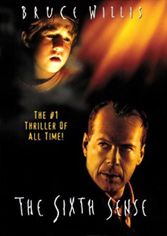 No way around it: child actor Haley Joel Osment’s “I see dead people” line helped fueled a generation of stand-up parody. Still, M. Night Shyamalan’s first feature — and his best film — possesses a magical architecture can haunt first-time viewers. It’s like a novel without a single hosanna on the cover that you later discover was written by Edgar Allen Poe.

Dr. Malcolm Crowe (Bruce Willis) is a Philadelphia child psychologist who takes a shine to Cole Sear (Osment), a sheepish boy whose occasional corpse-vision makes him unpopular in school. The dead confide in him. Crowe’s relationship with Cole, which gradually intensifies, seems to all but cut out his wife Ann (Olivia Williams), who over time grows virtually unaware of her husband’s existence, or so it seems. He’s a workaholic who does little but make her chilly.

Since Shyamalan is building to a monster kicker, he bulks up on rational premise-making: Crowe’s empathy toward Cole makes sense since the good doctor just survived his own brush with death. What better comeback for the “spared” doctor than trying to persuade a troubled boy that he really isn’t a spokesman for the hereafter. Cole’s mother Lynn (Toni Collette) gets edgy with presaging as the film warms to its River Styx climax.

But give Shyamalan credit: Neither Willis (superb) nor Osment cough up the real punch line. The result is a very fine ghost story that puts a premium on small details and manages to transform modern Philadelphia into a kind of Salem. Shyamalan made one more film with Willis, his good luck charm (“Unbreakable”), after which his supernatural leanings seemed always to come apart at the seams.