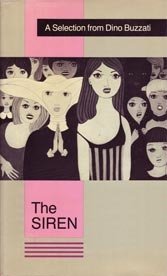 By Dino Buzzati, translated from the Italian by Lawrence Venuti

n Buzzati’s best work, the magical and the mundane flirt constantly, as if seeking to bed down. The union, when it happens, churns up a host of vaguely unsettling stories that amuse, tease and terrify, sometimes all three. “The Time Machine” puts forward the city of Diacosia, where a mysterious device parses time and guarantees its slowed-down residents a longer life – until someone pulls the plug. “The Gnawing Worm” yields Andrea, who meets long-lost college friend Egidio only to see the latter burrow into his life, eventually moving in — if only Andrea ever remembered ever having met his so-called friend. In “The Plague,” a clever allegory about authority and subversion, an otherwise bustling city is gradually infected by a wheezing plague that sickens and kills its … cars (“Oh, where were the festive klaxon and thundering of better days?”). “Barnabo of the Mountains,” the longest and oldest of the stories (1934), tugs at themes made famous by Buzzati’s later “The Tartar Steppe,” with this one a tale of Alpine troops at war with ghostly bandits as recounted by an omniscient narrator with a murky agenda.

What most distinguished journalist Buzzati (1906-1972) was his ability to take the surrealism and folklore prodded by likes of Borges and Calvino and invest it with sufficient news desk credibility to put suspended disbelief at risk. He’s like a farmer out early to harvest night terrors dreamed up by Futurists — making a case for a landscape composed only of greater and lesser unknowns. For Buzzati, there is nothing so modern it can’t be undone by superstition, and no human so skilled as to elude his own personal Dark Ages, which is where comparisons to Kafka are apt.