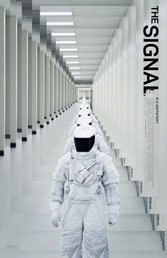 William Eubanks’s engrossing second feature is a surprising amalgam of digital disorder and human frailty. Nerdy Nic (Brenton Thwaites) and Jonah (Beau Knapp) are MIT grads driving Nic’s girlfriend Haley (Olivia Cooke) to the West Coast. Along the way, they want to track down a mystery hacker known as NOMAD, who has caused havoc by burrowing into MIT computers — and they think they have him located in a shack in Nevada.

The shack serves as Eubanks’ portal into an assumption-warping Twilight Zone dimension. Nic wakes in an underground lab where he’s told he and his friends have come into contact with extraterrestrial biology. He’s now a quarantined guinea pig under the microscope of a laconic, contamination-dressed scientist named Dr. Damon (Lawrence Fishburn) whose every rational word seems menacing. Nic, wheel-chair bound when he entered the shack, now possesses Oscar Pistorius-style prosthetics. How?

In “Love,” his ambitious but ultimately tedious stranded astronaut debut, Eubank siphoned from claustrophobia, and he does it again here. Only this time the circumstances are bizarre enough to leave answers up for grabs. Playing on the psychological and emotional details of confinement works to Eubanks’ advantage. The above ground action is as compelling as the underground lock-in: who’s the hunted, who the predator? How have Nic, Jonah and Haley become biohazard fugitives? Scrambled geography, peculiar zealotry, and Dachau-esque tattoos deepen the Area 51-style mystery. For an hour, sanity’s lines are blurred just enough let the best kind of ambiguity set in.

That spell admittedly deteriorates badly toward the end, when Eubank, enamored of Nima Fakhrara’s synthesizer-tinted soundtrack, feels compelled to dig his way out of (or further into) the maze of his own making. The ending is at once spectacular but unsatisfying. Still, the journey itself, which shares an endgame affinity with Alex Proyes’ “Dark City,” is well worth taking.