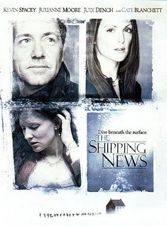 Not much to shout about, unless you like watching an unrecognizable Cate Blanchett (Petal). Lasse Hallström’s film respects the mood of E. Annie Proulx’s Pulitzer Prize-winning novel, though its Hollywood sensibility keeps Newfoundland from genuine hardness. Daughter Bunny in tow, Quoyle (Kevin Spacey) flees his shattered Poughkeepsie life (Petal is a loose cannon loser) for the ostensibly forthright Newfoundland of his ancestors. There, he meets “true” folk, including Wavey Prowse (Julianne Moore), with whom he falls in love. The problem with sincere films is how their sincerity snuffs out insinuation. Everything’s on a platter, annoyingly so.