The Sheer Impossibility of Nothingness 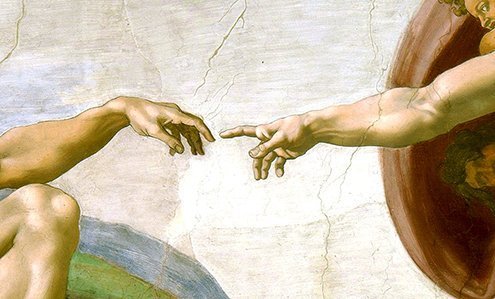 “Why is there something rather than nothing?” — Gottfried Wilhelm Leibniz, 1697

Three times in my life, I experienced true nothingness.

However, when I was in my twenties and reading things like “The Consolations of Philosophy,” I believed there was no such thing as “nothing.” Sure, we can all imagine “nothing” in contrast to “something,” but it’s not true nothing.

Here’s a room with some furniture in it, but this other room has nothing in it.

What you’re choosing to ignore in that setup is all the air and light and scientific stuff like molecules, not to mention the universe of microscopic organisms in the corner. Our conception of nothing exists only as a useful indication of the absence of other things, but it’s an entirely different beast from true nothingness.

My second semester in college, I took a Philosophy 101 class because I was all about being an “intellectual.” I met another pseudo-intellectual in the class, a girl with thick, black-rimmed glasses who always wore her hair in an odd braid. Our professor was lenient about interpretations of the essay excerpts we had to read, and I had a hunch that he couldn’t care less about his job, so rather than have to prepare lesson plans or lecture, he just let us talk to fill up enough time before he thought it was reasonable to dismiss class. I’m pretty sure he didn’t read any of our papers either because no one I knew received anything back from him.

Nevertheless, it was his sinecure that led me to meet the girl — let’s call her Krisna. Most students didn’t understand the readings — or perhaps hadn’t bothered to read them — and talked about unrelated anecdotes. A lady in the back always brought up her religious beliefs, which were neither here nor there, and Krisna made it her purpose to disagree with everything I said.

I’d put forth a logical point like, “Kierkegaard went about this all wrong. Instead of examining the whole situation and coming to a conclusion based on his investigations, he started with the conclusion that the Hebrew Bible had to be ‘correct’ and it was perfectly acceptable for Abraham to kill his son under God’s command. The whole thing is just Kierkegaard’s attempt to shoehorn in an explanation that meets his pre-determined conclusion.”

And she’d interrupt with her whole, “Kierkegaard’s teleological suspension of the ethical makes perfect, logical sense. If we accept that one of God’s Commandments is Thou Shalt Not Kill, we accept that God determines what is ethical, but if God goes against his previous command and commands Abraham to kill his son, God has temporarily redefined what is ethical because, like His creation, the universe that reflects Him, God is in a constant state of change, and in his infinite machinations for ends well beyond our comprehension, he must constantly change what is ethical. Is the sixth commandment discarded? No, it still exists, which is why Kierkegaard’s notion that it’s been temporarily suspended in the case of Abraham fits so well.”

And of course, I’d counter, and she’d refute — recalling it now, I scoff at our presumption to equate Kierkegaard with his pseudonym, Johannes de Silentio — and a half-hour before class was scheduled to end, the prof would jump in, mutter something about real life Platonic dialogues, and dismiss class. I don’t think he suspected that our relationship turned out to be far from platonic.

The first time I experienced true nothingness, the nurse’s official ruling was that I had fainted due to the stress of midterms. Did I pour my heart into my twelve page paper on Wittgenstein’s line, “Whereof one cannot speak, thereof one must be silent,” that I now consider to have been composed of seriously flawed interpretations? Yes, I became engrossed in the writing — but the nurse was giving a lot of credit to a paper that I’m 99.9 percent certain my professor didn’t do more than glance at.

It wasn’t like fainting. It wasn’t like falling into a deep sleep. I’ve been asleep before-almost every night of my life. Sleep comes nowhere close to nothing. Half the time you’re slightly aware of the irritants in the room — your roommate’s loud breathing, the solar flare emanating from the phone charger, the ill-suited temperature-and if you’re not experiencing a vivid dream that will exist as a ghost in the morning, you’re slightly aware of your brain cataloguing memories, defragmenting and arranging them into the proper lobes like a librarian quickly flipping through a rolodex and sorting the cards into drawers.

All of this is very far removed from nothing. Imagine yourself sitting in your living room. Now take away the universe that exists outside the room. Out there it’s simply clear like a pane of glass, but a pane of glass always has something behind it to give it color and imagery. This is just clear on top of clear the whole way down. And sitting there in the last room in the universe, you must imagine away all the furniture, the electronics — get rid of everything one by one until it’s just four walls and the hardwood floor. Imagine yourself out of the room, so it’s just an empty room on moving day. Now make the room disappear. Nothing, right? A void of colorless nothing.

There’s just one problem. You can’t get rid of your consciousness. You’re still imagining your bodiless consciousness experiencing the void. Only the rarest monk can imagine away consciousness, but if you could do it now, you’d have an idea of true nothingness.

That’s what I experienced in the quad on a March day during midterms. Not the idea of it, but actual nothingness, as though my body had been transported to a universe of nothing, and since nothing was permitted in this universe, my body and consciousness were instantly gone.

Ironic it should have happened mere days after a heated debate with Krisna. I was offended by all that “God stuff” back then, because I thought that there was no proof whatsoever that anything resembling “God,” exists (It wasn’t until after the first time I experienced true nothingness, I realized that there was no proof the universe should exist either). I was trying to keep our debate secular. In a classroom where most people were texting or browsing Facebook beneath their desks, she raised her voice and said in a heated tone, “You’re running away from what William James called, ‘The darkest question in all of philosophy.’ I thought this quote from Jim Holt summed up the situation pretty well.” She flipped through her notes and read, “‘But a universe without an explanation? That seems an absurdity too far, at least to a reason-seeking species like ourselves.’ So even if you want to dismiss the specific gods that humans have worshipped here on earth, you still need a God-figure to create the universe; otherwise, why is there a universe at all instead of nothing? Why are we here in the first place?”

“But that’s an absurd proposition you want me to accept,” I shot back in my foolishness. “We know of no true nothingness. Even a quantum vacuum is very much a something. The idea of a world of nothing has no basis in reality. As far as I can tell, the universe has to contain something.”

As I opened my eyes to the blue-green blur of a cold, spring day, baseball players I didn’t know hoisting me by the shoulders in the direction of the medical office, I realized that the God I’d rejected as superstitious mumbo-jumbo when slamming my door in the face of Jehovah’s Witnesses needed to be very much a real consideration in dissecting the mystery of how something came to exist instead of nothing. The laws of this universe failed to explain how those first particles could have manifested and begun to expand when there was absolutely nothing to create them with. Only a supernatural explanation seemed viable.

The dread of this enigma consumed my very being that semester. Krisna and I spent days in the library, scouring every philosophical and theological text related to the creation of the universe. To fill in the gaps, we’d spend late nights in the two-floor bookstore a few blocks from campus, stealing words with our eyes, and apologetically repaying them by purchasing cups of coffee from their café. We’d clog up the philosophy aisle for hours, stacks of books piled around us, loose paper from our notes intermingling together with a sketchy timeline that began with Parmenides and continued through Hegel’s, “The Absolute is Becoming.” Whenever they kicked us out at midnight, we’d spend another couple of hours at our campus’ all-night cafeteria, downloading seminal metaphysical texts that we couldn’t find anyplace else. Yet research as assiduously as we could, we merely found a variety of ideas and opinions. There was precious little in the vein of facts or observations.

I still remember the last time I ever saw Krisna — the final day of class. Even then, when all the other students expected to simply hand in their final paper and move on with their lives, she debated me more ardently than ever. But I was feeling contemplative, and I conceded her assertions with vague nods. The question had devoured every cell of certainty that had existed in my brain. I worried that we existed as a random chance of forces beyond our comprehension. It suddenly seemed that she was only disagreeing with me in an effort to regain my attention, but my attention was now on nothing. I feared that the universe could have been nothing, maybe even should have been nothing. I remember offhandedly wishing her a safe flight home as I stood up from my desk. I shuffled out of the classroom, looking everywhere for a clue about nothingness — walking out into my life and continuing the search.

Krisna had insisted that there couldn’t have always been something — that there had to be a moment when the switch from nothing to something occurred. I didn’t agree with her until the moonlit night behind her dorm when Krisna kissed me for the first time, and I understood creation ex nihilo.

A passion of fury and lust glistened in her eyes, but seconds earlier that kiss did not exist – the kiss was nothingness at that time. In an explosive instant, our lips connected, creating a universe of planets, stars, and creatures that lasted for eons. If you were a creature on the planet that existed in the smallest corner, of the tiniest crease where Krisna’s perfect lips met my own, you’d have no conception that your universe extended all the way to the back of our tongues. The knowledge that an even infinitely larger universe existed outside the cave of our mouths, and followed different rules than one created by a young couple that’d had a little too much wine and argument over dinner, would be beyond your realm of comprehension. But you’d be dead long before your universe cracked apart forever, with the separation of our kiss.

— Joseph Patrick Pascale’s fiction has been published in Birkensnake, Literary Orphans, 365 Tomorrows, and On a Narrow Windowsill: Fiction and Poetry Folded onto Twitter, among other journals and anthologies. He earned his master’s degree in literature from Centenary College, studying under poet Mark Doty. He worked as a farmhand, reporter, auto parts deliverer, and reference book editor before becoming educator.

About the Author: Joseph Patrick Pascale