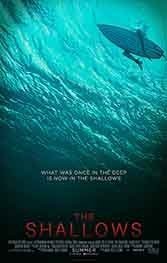 Nancy Adams (Blake Lively) is a Texas surfer chick who decides to visit a desolate stretch of Mexican beach her recently dead mother once frolicked on. When you learn the Gringa surfer is also a medical student whose mother didn’t go down without a fight, you know something’s brewing,

Spanish director Jaume Collet-Serra takes a few minutes to get into gear, but once he does delivers a tautly minimalist exercise in digital age self-reliance and survival. Prowling these shallows is a wounded shark with a voracious appetite and manic malevolence. Not satisfied with a piece of Nancy’s thigh (and the torsos of a few others on the side), it wants the rest of her.

What makes this entirely watchable is Lively, whose “Hunger Games”-era resourcefulness comes up aces. It’s just Nancy, the shark, and a sympathetic seagull with a broken wing (oh, and the camcorder). Can Nancy outsmart a predator in its own element and show dad and sis in Galveston that she’s got her mother’s right stuff? The answer’s obvious, since Don’t Mess With Texans always stand a fighting chance, especially when they’re nice to birds and boys alike. Nancy’s worth the price of admission so long as you’re not planning a trip to a desolate, tropical beach any time soon. Filmed in Australia.