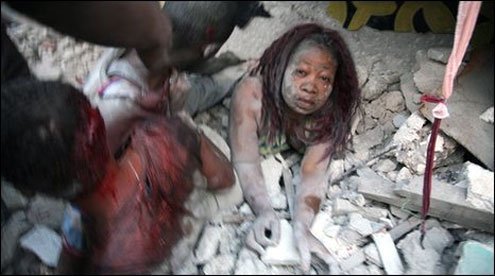 hy Haiti? Ha! Diversity. We were global long before anyone thought to call it that.

Tell us about Italy. You mean the Abruzzo quake? That was nothing. Italians are dramatic. I’ll be back.

Do you have any say over casualties? Not really. I’m just the wet dog, shaking itself off. What happens, happens.

What does a natural disaster think about when its not… shaking? Depends. I tend to think about my family roots, whether I’m doing a good job, the nature of the universe, how to compete with incoming asteroids, why people get so excited about what I do…

The ‘excited’ part seems obvious; you change or obliterate their world. I suppose. But the truth is I’ve been doing this for what, maybe a few hundred million years? They, the ‘people,’ came around recently. Before, no one said much because, well, I was dealing with things that didn’t talk: lava, mountains rages, molten parts, oceans. They took the shaking in stride. The ‘people’ thing has made life more… cinematic.

Well, that’s it, no? You’re now a source of images. That’s new. Yes, it is. I love watching people watching destruction. You can tell they’re sorry but that they’re glad it’s not them. They’re completely taken in by anything that can’t control. Nothing at all like volcanoes, which usually do what they’re told. What’s tiresome is that people are so repetitive, and that they take themselves — and me — so seriously. I never had that problem 100 million years ago. I just was. Now, every time I do something there’s this huge fuss.

How’d the dinosaurs take the shaking? Honestly, they really weren’t that bright. It was mostly, ‘Okay, are we living through today? Is there enough to eat? Oh, I’m dead, okay…’ Not much in the way of objection or protest.

Back to Haiti. Does it bother you that you inflict so much suffering on a place that’s already in such bad shape, I mean humanly? I don’t pick my work orders from a menu. I do what I do.

How do the orders come to you? That’s a trade secret, sorry. But if you want a ‘people’ analogy I guess I could be seen as the manifestation of an ache or a pain. The mistake is thinking I’m the cause of the pain. I’m not. I’m the response, the reaction, the scratching of the itch, call it what you will. What happened was going to happen. I’m the follow-through.

Do you like something about ‘people’? I have no feelings about them either way. It’s certainly a lot more entertaining when they’re around. They’re a voyeur species, which means they project their identity onto all that happens around them. Whenever they’re not dead, they’re thrilled. They get wild about survival. It’s crazy.

Do they make you feel more important, I mean with all the measuring, the mention of scales, the death toll? People think they matter, that they have some kind of anointed ‘specialness.’ That’s amusing, I admit. You watch generation after generation, and each one thinks that it matters more than the one that came before it, or that its problems are unique, whether it’s a war or a discovery or a set of feelings. Whatever they’re seeing is ‘unprecedented’ because they’re alive and they’re seeing it, which makes it exceptional. If you think about it from my point of view that kind of thinking is pretty hard to take seriously… It’s amusing and pathetic at once.

So people are a kind of ‘theater’ to you? That’s your word. Me, I prefer tornadoes and hurricanes and tidal waves to people-theater. It is theatrical to be working on a planet that thinks it’s the living end, an expression I rather like.

How so? Look, this place, all of it, has got maybe another few hundred million years left. The sun’s on a short leash. These people… they’re not really ‘going‘ anywhere. Future? What future is that exactly? People get excited when they look at the night sky. They say, ‘Oh, wow, that star doesn’t really exist anymore! That’s just its ‘dead’ light taking millions of years to travel here…’ But they refuse to see themselves as in the same category… as light that doesn’t exist, dead people walking. Leave it to people to find a way to see proof of their extinction as romantic. People eat, fight, and dream. Dinosaurs just ate and fought. More my style.

This is what you tell your friends and bosses? Nice try. I don’t talk about family.

Can you tell us a few of your favorite things? When it’s over — the shakes or the event, whatever it is, it usually gets quiet for a while. I like that. I like the quiet I cause. After the quiet comes all kinds of noises, but at first, nothing at all. My shaking gives pause: Nice thought.

Do you ever feel capable of ‘people’ things: anger, lust, love? Power I’m capable of, but I don’t feel it. People say they’d love to be me, to have my power. They’re wrong. They’d feel nothing.

Seems like you’ve thought a lot about feelings. Watching the hysteria of others can help get you through a bad day.