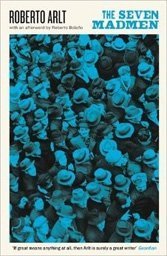 By Roberto Arlt, translated from the Spanish by Nick Caistor

Hapless and doomed Remo Erdosain lives in the belly of the beast, the decaying Buenos Aires of the late 1920s. He’s embezzled from his company, is on the verge of losing his wife, is haunted by apocalyptic visions, and leans on astrologers, pimps, and eccentrics for comfort, which of course they can’t provide, giving Erdosian all the more reason to believe he and the planet have gone mad. Why not join an “aristocracy of cynics,” a cabal intent of creating poison gas factories and dropping bubonic plague from planes to infuse Argentina with new meaning? Why not kidnap and murder?

Roberto Arlt’s comic doomsday novel, set in1929, reflects a city on the brink. After the American Depression, Argentina soon descended into a corruptly dictatorial abyss that would last a decade (some would say half-a-century). Erdosian’s meandering, detritus-ridden confessions are those of a man who is both victim and victimizer, besieged by a capital city so irrevocably unhinged that even lunatic conspiracies — his astrologer friend seeks to create a proto-Fascist state funded by an elaborate network of brothels — take on a lucid side, at least to impressionable, thunderstruck, quixotic Erdosian, inventor of a copper rose he hopes to sell. Arlt is a writer of gorgeous means. “His anguish,” he writes of Erdosian, forever at wit’s end, “was that of a man who carries a fearful cage inside him, where prowling, blood-stained tigers yawn among heaps of fish bones, their remorseless eyes poised for their next leap.”

Charlatans run amok, eager to unleash “the age of the Innocent Monster.” Swindlers sit astride the pantheon of heroes. Prostitutes hold court. Gold prospectors sing praises of Mussolini. “Just like in a pharmacy,” the astrologer says of his incipient secret society, “we’ll have a wide variety of perfect lies, each one labeled for a different disease of the mind or soul.” The way to meaning is through madness.

Decay and fatalism were second nature to Arlt (1900-1942), as were “mystics searching for their next meal.” He took the hiccupping urban machinery around him — he worked as an apprentice tinsmith, welder, brick factory manager, and dockworker — and added apocalyptic oil. The result is monstrously beautiful and fluid cynicism. This is a Beat Generation fable long before North America thought to give urban subversion a name.