The Seven Basic Plots: Why We Tell Stories 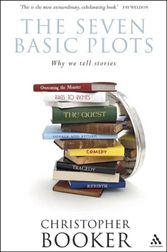 Tantalized by the notion that in fiction “the same images, with very little variation, have served all the authors who have ever written,” the remarkably erudite Christopher Booker sought to unearth the monomythic universals, and he spent thirty-four years writing this landmark tome.

Dissecting the thematic designs of works from the 5000 year-old Gilgamesh Epic to Harry Potter and innumerable examples in between —including Plato, Dante, Shakespeare, Cervantes, Mozart, the Bible, plus some popular trash which by contrast serves up revealing indicators — he demonstrates how all literature (with its by-products like opera and movies) reflects the “grooves” of the unconscious mind and either fits into seven fundamental structures or else “misses the mark,” detached from its archetypal purpose.

As Booker hammers his thesis, he argues that stories represent the most profound example of symbolic expression. Absolutely brilliant and riveting, this monumental (and hotly contested) study is a must.