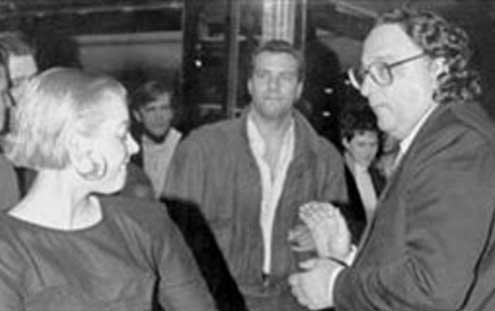 hen I first moved to Rome in 1988, politician Giovanni De Michelis was among the most powerful men in Italy. He was Socialist Prime Minister Bettino Craxi’s right hand man. Before Italy’s early-1990s political scandals brought him down, De Michelis occupied several notable posts, including heading the ministry of state-owned companies, of public works, and finally serving as a highly-regarded foreign affairs minister.

But both abroad and at home, De Michelis was probably more famous for his love of discotheques and parties. Photos of his immense body and long, sweaty hair cavorting on a dance floor with beautiful women summed up the excesses of Italy’s 1980s political scene.

Like clockwork, I would see De Michelis every day when an official blue car mysteriously brought him to Rome’s Via del Babuino, where I lived at the time. When I told guests at a Rome dinner party about his daily visit, I learned that he had a regular appointment with a lady friend who lived in my street. “But he’s disgusting. He’s fat and his hair is horrible!” I said. “Why would any woman be interested?” Everyone laughed. “It’s about power, not sex.” Together, they taught me the polite version of the Italian proverb: “It is better to give orders than have sex.”

Thirty years may have passed, but when pictures of Harvey Weinstein’s stubble and protruding gut exploded across the media, these old dinner table conversations came back to me.

I immediately compared Weinstein to De Michelis, the way many compared Donald Trump to Silvio Berlusconi. But as America’s sex scandals continue unfolding, I begin to realize the difference between the Italian and American perceptions of sex in relationship to power.

The aggression demonstrated by these men had a simplistically commercial component, like a trade between two people for a set price. Women were treated like weak gazelles that predators separated from a protective flock, isolating them before the attack.

In Italy’s male-female power dynamics, there was no single transaction, but a wide network of highly social exchanges. I can’t recall an Italian sex scandal — whether in sports, finance or politics — that did not revolve around lavish parties in beautiful places, usually villas or palazzo. When such scandals break in Italy, dozens of people are usually implicated and the lines between enablers, victims and predators are usually blurry.

In America, the sex exchange is a discrete and dirty deed consummated in the commercial anonymity of a hotel. In Italy, the sex is one course in a sensual banquet, a brief diversion in the villa garden or a palazzo bedroom while the party carries on downstairs.

America’s harasser-in-chief apparently grabbed women wherever he found them, no preambles necessary. Berlusconi gave sex parties, where champagne flowed and he shared the fun with friends and associates. Guests of all kinds and the girls enjoyed an “elegant dinner” and then sang along with the crooning prime minister at the piano. Those who deplored what they saw never came back, no hard feelings.

American women made a humiliating sacrifice for access to a single person’s power. Italian girls paid a toll to enter a paternalistic system. Berlusconi’s girls were known as the “Olgettine,” because they lived together in a building Berlusconi owned in the Milan suburb of Olgiate. Berlusconi’s staff took care of paying utilities, shepherding girls to Berlusconi’s villas and providing spending money, clothes and jewelry.

While American predators relied on fear of physical harm and retribution, Italians used persuasion and the pretenses of charm. Berlusconi himself acted like an old-fashioned suitor, plying girls with gifts and flowers and helping out their families. Once in Berlusconi’s orbit they — and their relatives —might expect jobs in his media empire, or being taken care of in Olgiate. Berlusconi himself cultivated old-fashioned ideas of charm, amiability and loyalty. De Michelis, the dinner guests assured me, was extremely intelligent — a former chemistry professor — who, powerful position aside, was cultivated and charming enough to be a sought-after guest.

From the victims’ accounts, the script for encounters with Weinstein, Louis C.K. or Charlie Rose was a B-grade horror film. “Don’t open that door!”

The Italian script would be Mozart’s opera “Don Giovanni,” whose libretto was written by Italian Lorenzo Da Ponte. The action takes place in beautiful villas and palazzi. Dozens of people are involved. Wine flows and there is dancing. The noble Don Giovanni’s seduction of peasant Zerlina takes place at a wedding. He promises Zerlina he’ll “take her by her hand” and “I will change your life.” Frightened but intrigued, Zerlina sings vorrei, ma non vorrei” (“I want to, but I don’t.)

In the end, it will not go as Don Giovanni plans. His past catches up with him. Previous victims denounce him to Zerlina. While Don Giovanni waits for a party to begin, the flames of hell swallow him up.