The Secret of Citrus 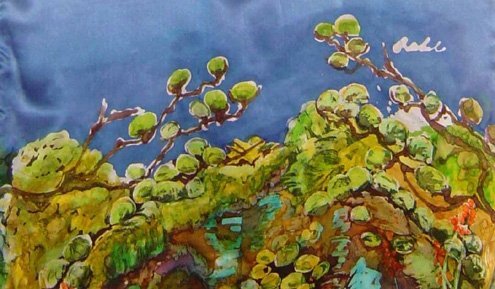 Then he thought of something. "Where did you get the kimono?"

Three weeks after his second wife, Kim, moved out of the house, Paul Stone came home early from work to find his supposedly dead first wife, Sarah, leaning out their open bedroom window, alternately sucking on a pot-pipe and blowing small trails of pot smoke into the cool summer sky. Sarah was wearing the loose chartreuse silk kimono Paul had bought her for her fortieth birthday and from the way she was leaning he could see that her body had miraculously recovered from the ravages of ripped and twisting car metal that had killed her. Or that presumably had killed her. Paul had personally identified her body (what remained of it) at the hospital, then watched her casket sealed and lowered into the ground. Yet here she was, not quite two years later, smoking a pipe and laughing and apparently none the worse for her ordeal. Then she looked down and their eyes locked, and Paul recognized that of course it wasn’t his dead first wife, Sarah, leaning out his bedroom window at all, but his sixteen year old daughter, Adrian.

After recovering from this hallucination, Paul tried to react to the situation like a responsible parent. He stormed into the house, upstairs, confronting Adrian and her friend. He demanded the pipe. He removed the door of her room off of it’s hinges.

“Why my door,” said Adrian, following him around. “I was smoking in your room. Shouldn’t you take your door off?” The question sounded sincere and even carried a certain logic, but Paul didn’t pause to debate. He felt that if he did pause, he might never start again. The fact was, all through the process — yelling at the kids, demanding the pipe, getting his tools, struggling with the door — Paul felt that it wasn’t really him that was acting this way; that the real him was being dragged around, confused and frightened, by some bigger, older, angry person; that the real him was on the verge of tears.

“It was only some hash, Daddy,” said Adrian at one point. “Get a grip.”

Only some hash. Paul hadn’t asked what was in the pipe. He wasn’t sure he wanted to know, in the same way he wasn’t sure if he wanted to know why she was wearing her dead mother’s kimono or why she had been smoking in his bedroom instead of her own. He snatched the pipe from her hand and snapped it in two. It was a short stubby pipe made of semi-translucent ceramic (or was it glass?). When it snapped it sent a shock through both his forearms and the fingers of his right hand went numb. When he looked, he found a thin slice across the pad of his thumb that turned red as he watched.

“There!” he said, displaying his thumb triumphantly. “Now… you, Miss… Miss…”

“Molly,” said the friend. She had remained impassive thus far, standing beside Adrian, both of them with arms crossed, taller than Paul, watching him curiously. At the sight of his blood, however, Molly made a squeamish face and recoiled. Paul had the impulse to follow her, to chase her around the house with his bleeding thumb.

“Okay, Molly,” he said. “I want you to go call your parents and tell them what you were doing and have them come pick you up. Do you understand me? You can’t stay here.”

“Um,” Molly pursed her lips, still eyeing the thumb. “My parents are in… Rome?”

“Rome!” Paul glanced at Adrian. He wasn’t really looking for confirmation, but she nodded and lifted one hand in apology. There was something troubling about the gesture, and something familiar as well, but it wasn’t until much later, when he was lying in his own bed, staring up at the dark ceiling, that Paul recognized what it was. It was the same gesture that Kim had made three weeks earlier, when she told him she was leaving.

“A break will be good for you,” she had said, that day. “Maybe you can get to know your daughter without me in the way.”

It was a peace offering, but Paul, not able to see past his own anger, had turned it into a cold joke. “I know her quite well,” he had said. “You forget, I pay her charge bill each month.”

Kim hadn’t laughed or even bothered to reply. She just shrugged helplessly, lifting her hand in that same gesture of surrender and… pity.

Paul got out of bed and moved quietly down the hall to where Adrian’s doorless doorway was an empty black rectangle. He couldn’t see inside, but he could hear her sleeping, breathing deep and slow and steady, and he could smell her: the same brazen, spicy scent he had smelled when he entered her room earlier to take off the door. It was a smell mostly of cigarettes, but other things too: leather, Patchouli, perfume. Underneath all that there was a subtle hint of something lighter, distant. Paul had smelled it earlier, when he was working on the door, but he hadn’t been able to focus, then, to try to figure it out. Now he leaned forward, almost into her room, and took a deep breath, and remembered: The Secret of Citrus. It was a book that Sarah had picked up about natural preventatives to skin wrinkles. For a while both she and Adrian had been obsessed with lemons. They bathed with the juice, ate it in everything, washed their hair with it. Sarah was trying to preserve her skin, Adrian just wanted to do what her mother did. Even when Sarah stopped the routine, for a while Adrian kept it up. Once, weeks after Sarah had stopped, Adrian brought a lemon into their bedroom as Sarah and Paul were getting ready for bed. Wordlessly she handed it to her mother, then waited for her to place it on a small plate by the head of the bed, as they had done together previously. This accomplished, she nodded solemnly and left. Later Sarah threw it away. “Hell with it,” she whispered to Paul when they lay together in the darkness. “I’ll get old, I’ll wrinkle, you’ll leave me, no lemon is going to change that.” At the time Paul had laughed, hugged her tighter. He loved Sarah, knew he would love her no matter how old she got or what she looked like. The fact that she could say such things only made him more determined to love her forever.

Paul froze. In the darkness, Adrian’s voice was small and throaty, like she might be speaking from sleep. Then she moved, her mattress creaking. “Daddy?” she said again.

Adrian released a gust of breath. Paul could hear her moving in the bed. Then her bedside light came on and she was sitting there, squinting at him. “Daddy, for God’s sake, what are you doing?”

She was still half asleep, disheveled, her face flushed. Paul could see, now, that she had been frightened, probably woken up to see his silhouette in the doorway. She was also confused and concerned, wondering why he was there, if something was wrong. Those more sympathetic sentiments were rapidly fading, however, replaced by something harder, as she took stock of the situation. “What time is it?” she asked.

“It’s just two,” Paul whispered. “I think.” He was still speaking softly, soothingly, as if to keep her from waking up all the way, although there didn’t seem much hope for that now.

“Well, what are you doing,” demanded Adrian. “What do you want?”

“Nothing,” said Paul. “I couldn’t sleep. I just looked in.” Then he thought of something. “Where did you get the kimono?”

Adrian fell back on the bed. She looked up at the ceiling and took a long time to answer. “I saved it,” she said.

“But where did you get it?”

“I saved it from before. What difference does it make!” She twisted to look at him, then turned over to her other side, facing the wall.

Paul watched her for a moment, then crossed the room and sat beside her on the bed. He placed his palm on her shoulder. “I saved some things too,” he said. “Some pictures, letters. Kim said some day you would want them.”

Adrian didn’t say anything, but beneath the blankets Paul thought he felt her shrug. She was still awake, looking at the wall. After a moment he pulled the blankets closer around her shoulders and stood up and shut off the light.

Paul felt something loosen in his stomach. Then he realized that she was talking about Kim. “No,” he said. “She’s not coming back.”

BACK IN his own room, Paul lay in his bed and tried to figure out when the change had taken place, when his daughter had switched from citrus to cigarettes. It wasn’t hard to guess. Paul supposed that if he had to pin a time and date to it, he would say that it happened one year and nine months earlier when her mother’s car skidded on a patch of ice and connected sideways with an oncoming snowplow. Or maybe it had happened ten minutes earlier than that, when Sarah had run out of the house, crying. Or maybe thirty seconds before that, when Paul had confessed to having an affair with Kim. That seemed like a pivotal moment. Paul could remember it well: the look on her face as he told her. He had watched from the window as she climbed awkwardly into her car. And he had seen her body slump at the wheel just before she backed out of the driveway. At that moment, he had felt her despair more acutely than his own: she had nowhere else to go.

Almost two years later, however, lying in his bed, Paul’s mind settled on another event entirely, one that occurred two months before the accident. It had been snowing that day and from the commuter train the city had appeared transformed, and Paul had taken it as symbolic: the promise of a new beginning. He had met Kim for lunch but neither of them had eaten or said much. Without admitting it, they both agreed what was about to happen. They took a cab to her apartment. Paul had never been there before and the snowy diffuse light through the window made everything in the living room appear silvery and magical, and Paul had decided that whatever happened there, in that apartment, would remain separate and have no consequence on the rest of his life.

About the Author: Mathew Lebowitz

— Mathew Lebowitz attended the Iowa Writers’ Workshop and has published stories in numerous literary magaziness. This is his fourth story for "The American." He is now at work on a novel about the approaching humanoid revolution, from which this piece is excerpted He is represented by Laurie Liss at Sterling Lord Literistic.