The secret life of nonnas (or, Jesus’ lost arm) 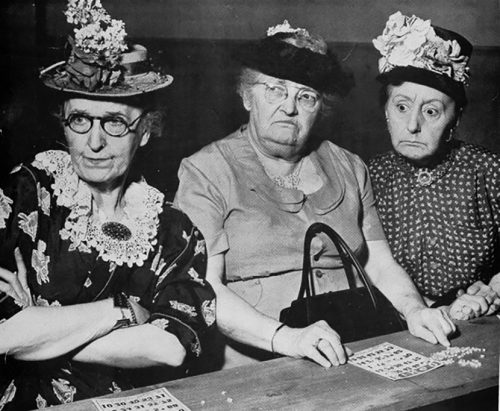 Never underestimate the (longstanding) power of bingo.
I

t’s 11 a.m. on a Thursday and I’m pushing the tiny purples sills on my bingo card back up for the fifth time.

Next to me, Marguerite rummages through a well-worn canvas sack, plucking out a wooden chip, moving it back and forth in front of her face to make out the tiny white numbers.

“Sexy legs,” the table screams in delight. They do it every time and it never fails to get a laugh.

A beat or two later, my nonna nods and turns to me. “Sexy legs, Elisa,” she says seriously, batting my hand away to better inspect my cards. “That’s undici,” she translates, clearly worried that, I, the foreigner (back in Australia from Italy), hadn’t understood.

Welcome to the Dandenong Napoli Club.

I’m $4 down at this point. A veritable fortune when each game costs 30 cents. Perfectly coiffed and donning four different rosaries, Lina turns to ask my thoughts on the Genoa bridge collapse, but she’s quickly hushed by a tableful of indignant “ssshhhhs.” You don’t come to the Napoli club to socialize.

We’ve played every game in quick succession, the numbers blurring before my eyes as the portly Marguerite yells them out far too quickly for me, but not the octogenarians, to follow.

There are only two Australian women at the table, Marguerite and Sandra, but like all good Brits before them, they’ve colonized the elderly natives.

I’m affronted on my nonna’s behalf, so when it’s my turn to read the numbers, I make a point of saying them in Italian first. My nonna just rolls her eyes. She has an angelic disposition with the spirit to match. She would never dream of complaining and she doesn’t need my help. She knows them all.

A short reprieve is granted for lunch at 11:45. Today it’s ham, cheese and salad sandwiches prepared by other peoples’ nonnas in the community centre’s tiny kitchen. Sandra reaches into her gigantic brown handbag and pulls out a Ziploc bag with salt, pepper and chilli balsamic glaze, making culinary history as the first Australian ever to criticize an Italian for under-seasoning.

I didn’t want my sandwich, but my nonna insisted we buy one. We can’t have people thinking we’re poor. Teresa lends us her knife so we can share and then almost goes into cardiac arrest when she thinks nonna might be making off with it. She’s a big Venetian woman with a voice like a smoker’s cough and an affection for retelling her stories with five “fuck-enas” a minute. She uses the word with the gleeful abandon of someone who underestimates the severity of their second language’s swearwords.

I’ve known these ladies for two decades. When I was younger and still convinced Italy was the center of the universe, I used to love strolling in arm-in-arm with my nonna, cementing my status as the granddaughter all the other nonnas wish they had.

The sheen has worn off in my 30th year, but I don’t have to heart to tell my nonna I’d rather do anything else on a Thursday morning than listen to Teresa whine about being the “fucking-na first” to get “fucking-na three” in a “fucking-na row.”

Things get dicey after lunch. We’re into our 25th inning and nonna has won four bingos in a row. Maria, who was away last week, storms off on in a huff. Thirty minutes earlier she’d been showing us her picture in the local seniors’ newsletter, “Senior Living.” She was doing Zumba in a striped leotard that matched her black and brown dye job. I can’t get the picture out of my head.

The table takes a moment to bitch about Maria once she’s left. It’s a scorn they usually reserve for Teresa, who is prone to stints of silence if she doesn’t win every second game. Nonna decides it’s time for us to leave, proclaiming loudly (and falsely) that she has to get to the shops. She’s just noticed the Jesus on her four-finger-sized golden crucifix has lost an arm. She has to get home and find the missing appendage before the Man upstairs notices and condemns her to Hell.

Her words, not mine.

We brought a box of biscotti to the club that day to celebrate my nephew Luca’s birth. It would have been poor form to show up with nothing. The other nonnas asked to see a picture and mine acquiesces. She smiles beatifically as they gush over his eyes, his hair and his weight.

Moments after, I return my phone to my bag and the game resumes. My nonna turns to me and whispers in pure Calabrese, “I had my fingers crossed just in case any of those jealous bitches gave us the malocchio (evil eye).”

As she shuffles out the glass sliding doors, one arm gripping mine, the other threaded through her black handbag, waving queen-like to her oldest friends, she whispers, “Did you see how many biscotti Teresa took?