The Seamstress and the Wind 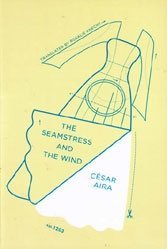 By César Aira, translated from the Spanish by Rosalie Knecht

Aira’s novella reads like a pecadillo concocted by screwball deity with a wicked sense of humor and a penchant for the Keystone Kops. The opening couldn’t be more misleading, a welt of moaning and groaning about the author’s disdain for remembrance and his inability to concoct a plot for a book called “The Seamstress and the Wind,” a book he’d thought up before flying to Paris, where he is now. Soon after, sitting in café, he burrows into his small-town Argentina past to concoct a hilariously macabre parable, an adult children’s story that serves as an emissary for primal anxieties.

When Aira’s best friend Omar goes missing, his seamstress mother Delia, busy readying a wedding gown for pregnant mother-to-be Silvia, panics and jumps in a local taxi cab to chase after a Patagonia-headed rig she thinks has absconded with her son (who in fact hasn’t gone anywhere). But the taxi rams into the 30-wheeler and disoriented Delia suddenly finds herself at the mercy of the wind, Ventarrón, which has a crush on her. Meanwhile, Delia’s gambling husband Ramón also makes chase and runs into Silvia, who’s also driving south to get back her wedding gown. When Silvia is raped by the drunken trucker the fetus is having none of it. It pulls trucker’s penis with “a few pale blue little fingers” and escapes the womb as a monster, upsetting the noble wind. Ramon won’t give up, putting a car engine into prehistoric armadillo shell to create a “Paleomobile” and continues searching for his wind-loved wife.

This isn’t magical realism, it’s a realm-building at the behest of the dreams filtered through the fears and fantasies of children and adults alike. No writer whimsy into such a small space. “The sadness in any memory,” writes Aira, “comes from the fact that it’s object is forgetting.” But never forgets.