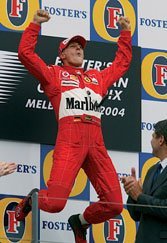 e is, believe it, a demitasse-size John F. Kerry (not Kennedy, Kerry) who likes visiting Texas with his wife and kids. His handshake is soft-skinned but hard-muscled. He is not, says a friend, pedantic about being a celebrity. He is relaxed and cordial but obviously wary of those who would interview him.

These descriptions are lifted straight from the front page of the Los Angeles Times.

Silvio Berlusconi? Unlikely. He’s hardly demi-tasse. Roberto Begnigni? No. He’s more antic than pedantic. Beppe Severgnini? Scarcely. Wary does not describe him. Francesco Totti? Relaxed, yes. But he hasn’t been sighted in Texas recently. Nor does he speak Texan.

So who gets a 2,000 word profile in the esteemed Column 1 slot of America’s third most-powerful newspaper, after The New York Times and the Washington Post?

Yes, Schumacher is German, but Ferrari is most definitely not.

Which is why Schumacher can sensibly be called the Parmalat antidote, the Italian scene’s superior anti-cliché. Here is a prodigious champion driving for a fabled Italian auto racing team, someone whose talents are so concentrated (he’s won six Formula One world titles, four straight for Ferrari) that he’s elevated a once-stricken company into quadruple-axel prominence. It’s true that Ferrari never needed a fan base or a poster boy, but 10 years ago it advertised for a savior. In 1997, it got one.

Schumacher has been a one-man PR machine for the state-of-the-art feats of Italian engineering. Moreover, his devotion to teamwork runs counterclockwise to self-serving whim.

“Every time he touches a wheel he adds to his fame,” writes Dan Neil, who penned the Los Angeles Times profile. And then this, “He is pound for pound perhaps the most famous athlete since Muhammad Ali…”

Neil sought Schumacher for four fundamental reasons: Ferrari, Americans’ love for cars, his enormous annual income (about $75 million, three million less than Tiger Woods), and an underlying fascination for an Italian mega-success, which is a rare occurrence and breaks a bad-news mold.

Consider Italy’s media place-holders in recent months: Berlusconi (not a negative, but not a positive either), ailing Umberto Bossi (a risotto racist), Romano Prodi (a bright bore), Calisto Tanzi (a painful embarrassment), Sergio Cragnotti (another embarrassment), Marco Pantani (an intrinsically tragic figure), the pope (a regular on this list), and Christ as devised by Mel Gibson in The Passion of Christ (a entertainment nugget hard-peddled as intellect).

There have been a few others, most of them undistinguished (Mafia has-beens, debauched teen authors) stereotype-driven representations of silly-putty Italy.

But Schumacher, a man who is both literally and figuratively driven, hardly fits that roiling text. He’s a curious outsider whose remarkable charisma – cold, steely, but immensely attractive — makes him the envy of even critical onlookers. He elevates Ferrari, which elevates Fiat, which elevates Italy, which by association sears a vision of a triumphal Italy on the front pages of world papers and web sites. This is no small feat.

When Schumacher won the Australian Grand Prix in March (he’s since won two more races, all three this season) he said, pointedly, and loudly, “Grazie per questa macchina fantastica.” He spoke in English, as is his habit, but his velocity knows only Italian. In six years with Ferrari he’s won 53 races; overall, he’s triumphed 74 times in 197 starts. That’s over 40 percent. In soccer terms, he’s the 100-goal scorer; in baseball, he’s batting .420. This is Michael Jordan caressing a gearbox, Wayne Gretzky in a cockpit.

The Schumacher effect, as it concerns Italy, is dizzying. He’s the first Italian-based sports personality since Olympic skier Alberto Tomba expected to delight each time out (the burly Bolognese Tomba dominated headlines in the late 1980s and early 90s.) And he’s the only figure who swells national pride – Italian flags fly at races — the way the national soccer team could in its halcyon days.

Luca di Montezemolo, the worldly, hyper-clever Ferrari boss (and recently elected Confindustria chief), ably manipulates the Schumacher image so it plays effectively in both the Italian and global marketplaces. After the Australian race, he told Corriere della Sera he was jealous of his scuderia, or stable, which of course Schumacher leads. Pressed on the word jealous, Montezomolo waxed sentimental. “If you have a team that you sense is perfect, and that all admire and look at, sure, you get a little jealous. As if it were a beautiful woman.”

But then, quickly, came a wise change in tack: “Ferrari is a great small business that like a lot of other businesses exalts the value of Italian technology in the world.”

He goes on to list drivers who envy Ferrari. He calls Schumacher “ferrarista e italianizzato,” perhaps the highest compliment an Italian can award an oriundo.

Cannavò’s passionately idiosyncratic writing drives British reporters mad, and that assures Ferrari of blanket coverage in race-crazed Britain, birthplace of McLaren, Williams, and several of the sport’s best drivers — Stirling Moss, the late Jim Clark, Nigel Mansell. (That Schumacher is a German “ace” brings with it, for the British, a considerable bit of historical baggage.)

The ultimate strength of the Schumacher-Ferrari alliance may lie in its ability to engage and entertain teary Latins while earning the concurrent respect of cynical Anglos and applauding Saxons. It is the perfect blend of Germanic rigor and Latinate grace, a match made in heaven and given cool wheels. “The team of Schumacher and Ferrari are as closest thing to perfection in the auto racing world,” oozed France’s sports daily L’Equipe after Schumacher won in Malaysia on March 21. Words all but failed when he won again, in Bahrain, April 4.

And such success plays even in America, where Schumacher is hardly known. The Times’ Neil makes ESPN work of the German by dressing him up as a Nike figure: “He works out obsessively, combining weight training, cycling and soccer in daily routines that take many hours…” Perfect.

Montezemolo and others can also be grateful to Schumacher for deflecting some of the attention of the business media away from Fiat’s woes (Ferrari’s success sits astride Fiat’s — and Gianni Agnelli’s — failures). To go after Fiat means to tear at Ferrari, and at Montezemolo, which is tantamount to heresy. Much Fiat damage control is rolled over to the departed Agnelli’s love for racing, for Ferrari, and his respect for Schumacher — Ferrari even named a racer after Agnelli. (Few mention the acrimonious power struggle between the aging autocrats, Enzo Ferrari and Agnelli, when the two sparred in the 1970s and 80s. Fiat bought Ferrari from Ferrari, who died in 1998.)

Schumacher, the demitasse Kerry, is now 35. He’s unlikely to serve a third term — his Ferrari contract has been extended twice already. He will capture other races, and perhaps even other titles.

But the real race is the one Schumacher won long ago, that of putting a modern face on il gioco di squadra. He has again made Ferrari the envy of the car-loving world. More important, he has helped mitigate an ill-starred vision of Italy, one that is regrettably (but not falsely) defined by tales of lurid vanity, business corruption, and a resistance to the idea Schumacher and Ferrari expensively represent: working toward a common goal, and following through.

(Editor’s note: Schumacher clinched his seventh world title, and fifth in a row, in September 2004. He retired in 2006.)