The sands of time 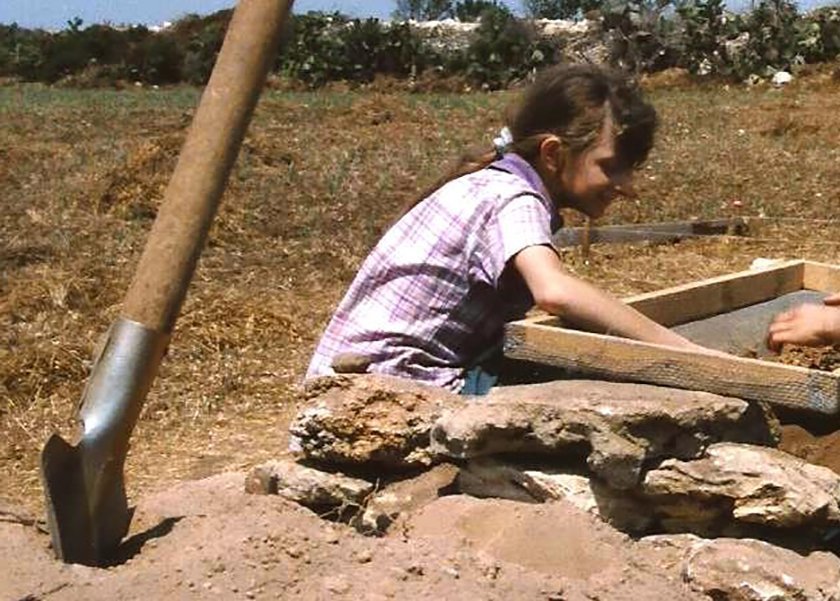 Some three decades ago, the author's daughter was the darling of a deep south dig.
L

ight rain had fallen for most of a virtually sleepless stormy night a few weeks ago. I got up around 6 a.m., when the south-easterly sirocco gale that had blown for hours had subsided.

It’s my usual waking time. I let the dogs out into the garden and make coffee. Our house is on the outskirts of Presicce, deep in south Salento. Wind is commonplace in the heel of the Italian boot, whose motto is Salentu, lu sule, lu mare e lu ientu, which in the local dialect means, “Salento, sun, sea and wind.” 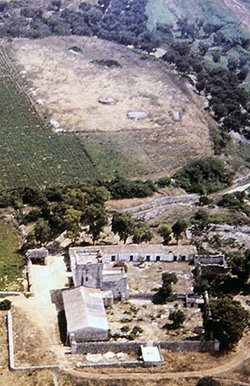 The Bronze Age site of Fani, not far from the author’s home.

The boot is a peninsula that stretches into the Ionian Sea. It has no mountains to divert the chilly northern tramontane wind. Hot and cold collide. Only the Mediterranean stands between the hot, steamy, at times cyclone-like currents blowing from a south that is only a stone’s throw from the dunes of Africa.

That morning, thin, reddish sand shrouded not only my silver-gray Peugeot 407, but also the floor of the patio. Dusted as well were the leaves of the trees, and of the roses and oleanders. The sky appeared leaden in the feeble light, and the air was misty and thick with both humidity and the talcum-like sand. My hair and clothes felt sticky. By sunrise all was immersed in a sort of orange, Martian-like, atmosphere.

I took the broom and began sweeping, hoping to limit the desert landscape the dogs would only add to when they returned. I couldn’t help thinking that at various times in history whole cities had been buried by sand. Civilizations had disappeared under the accumulation and stratification of layer upon layer of this stuff. Mostly, it was dust or volcanic ash transported by the winds from places far away, the final effect of sandy storms that had originated in the arid plains of Africa or Asia.

Pompeii and Herculaneum, their legacies preserved by volcanic ash, are two of the more striking examples. The two cities (and also Stabia and smaller villages south of Mount Vesuvius) were literally smothered by hundreds of thousands of tons of ash when the Vesuvius erupted in 79 AD, nonum kal. septembres (“nine days before the calends of September”), according to Pliny the Younger, which would place the event on August 24.

Wind is commonplace in the heel of the Italian boot, whose motto is Salentu, lu sule, lu mare e lu ientu, which in the local dialect means, “Salento, sun, sea and wind.”

But on January 14th of this year, 18,000 people on the island of Luzon, in the Philippines, were evacuated after the Taal volcano, looming over the city of Tagaytay, emitted a huge ash cloud that blanketed houses, plants, and animals for a 25-kilometer radius. Precious ready-to-harvest crops were lost and thousands of farm animals died. Colossal sandstorms periodically choke the cities in central China, and in Egypt archaeologists are busy excavating the ruins of the Roman city of Trimithis, abandoned by its population who sensed peril at hand. Soon after, a sequence of furious winter sandstorms completely submerged the large city.

I am an amateur archaeologist, and I recall working with a team of visiting Australian archaeologists (to which I attached myself very informally). They’d busy themselves “swinging their picks abroad,” in the words of Australian poet Paul Sherman, digging a Bronze Age site not far from my place, known locally as I Fani or il Fano. The campaigns lasted from the late 1980s well into the 1990s. My daughter Alessandra, a young girl at the time, would accompany me and keep herself happily busy washing huge quantities of animal bone remains and ceramic shards, while chatting with the archaeologists. She became the darling of the team. Since the 14th century BC, the site had been occupied most likely by a proto-Apennine village. It was later abandoned and reoccupied by a tribe of Messapians (an Indo-European people) around the 9th century BC, which is when the walls of the village were restored and reinforced. It was a small settlement on a plateau in sight of the sea, covering an area of about one hectare (about 2.5 acres). The Messapians emigrated from the ancient Balkan region of Illyria, today’s Albania, and part of Montenegro. Other groups had arrived from Crete, probably fleeing the destruction caused by the Minoan eruption around 1620 BC, which destroyed much of what today is called Santorini (then known as Thera). The subsequent Mycenaean invasion of Crete only increased the flow of refugees from the island to southern Apulia. A sort of melting pot was created in the heel of Italy. The Messapians built several large cities all over Salento, all surrounded by imposing stone walls composed of large square blocks. They spoke a still mysterious language, but used a kind of Greek alphabet, the Laconian version, presumably imported from the adjoining Greek colony of Taras, today’s Taranto. Greek was also used, since trade with Taras and mainland Greece flourished, as attested by the multitude of vases on display in the Taranto Museum.

By sunrise all was immersed in a sort of orange, Martian-like, atmosphere.

The Messapian religion was also inspired by the Greek pantheon of deities, and sanctuaries were dedicated to Demeter, Persephone, and Zeus.

We do not know if the original name of the settlement was really Fano, but a Greek island in the Ionian Sea, a few miles off Corfu, just across the Strait of Otranto, bears the name of Fanò (in Greek also Othoni/Οθωνοί). The Fano settlement was abandoned again sometime between the 8th and the 7th century BC, then restored once more and definitively abandoned around the 5th century BC, probably because it was too small and difficult to defend from passing sea raiders. The inhabitants just moved elsewhere, to the nearby, much larger and strongly fortified, cities of Ozan (now Ugento) and Veretum (the site of today’s small town of Patù). In time the place was literally dismantled. The large stone blocks of the walls were carted away and reused. Dust, sand, ash, and soil sliding along the sloping ground during the rainy season buried all signs of the presence of man. Only a sliver of the walls remained, a peculiar and roughly circular shape that had no parallel in the surrounding countryside. It hinted at something profoundly ancient.

Just as profoundly ancient as sand, which the archeologists found in the stratified layers below ground, thick orange kernels of Sahara sand, suggesting some devastating climactic event might have led to the area’s abandonment.

The sands of time, I thought to myself while recalling the digs of yesteryear and pondering how many millions of sirocco nights it was since the beginning of time, all the while working to push away the red sand, sure to come back soon.