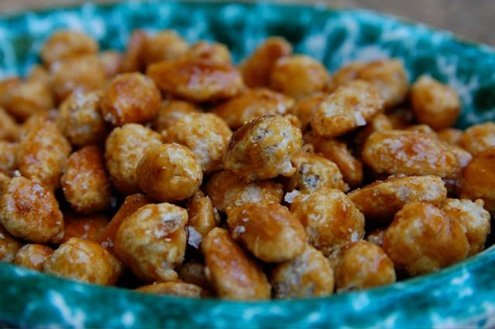 Caramelized peanuts. See recipe below. All photos by Judy Witts.
I

confess: I’m a salt junkie. My kitchen cupboards have 10 kinds of salt, two from Sicily, one from the Adriatic city of Cervia, three from France, and one each from Slovenia and the Himalayas. I even have salt I picked up during a medieval festival in Volterra.

These are just the sea salts.

I also have “flavored” varieties: Truffle salt from Umbria, ginger lemon salt with calendula leaves (a favorite) and my own herb salt (I gave away my vanilla-infused salt from Maldon and so far have resisted buying any of the beautiful black salts or smoked salts.)

Tuscan bread is salt-free, which may help explain my addiction. But that’s only part of it. Salt it the final ingredient in almost any Italian recipe. Look and you’ll see “sale, q.b.,” or quanto basta — which means as much as you think you need. Salt gives a dish nuance.

Most shoppers use the inexpensive kind, table salt made from sodium-rich minerals known as sale grosso at grocery stores.

Artisan salts only recently became available for home use. Almost all are made from salt water. My first sea salt indulgence was a Himalayan pink, followed by Fleur du Sel, the grey “gourmet” sea salt from Brittany.

Knowing how to choose a salt isn’t easy. Its flavor depends not only on whether it hails from land or sea but on how it’s harvested and manufactured. Table salt is usually extracted from rock formations that once lay underwater. The salt, like diamonds in coal, is contained in the rock mass itself. The crusted remnants are bathed, the brine collected, and the salt scraped clean and the crystals broken down into granules. Sea salt is just what it sounds like: the remnants of evaporated ocean water. The water is specially dried and the salt hand-harvested in pans (Italy, France, Australia, India and Wales are among the leading producers).

Sicily has produced salt since the Phoenicians occupied the territory more than 2,000 years ago. Many forget it was the world’s foremost preservative in pre-refrigerated times. Meats and herbs were chopped with fine sea salt to absorb moisture and keep them from rot. Salted pork was a staple for sailors.

I toured salt works in Trapani. The refinement process intrigued me. Salt water is shifted from pool-to-pool using an Archimedes screw pump (he’s believed to have invented the device in ancient Siracusa, where he lived).

The process, called solar evaporation, sees brine gradually moved from one pond to another, with each pool containing a higher level of salinity. Wind and heat then help the water to evaporate, leaving salt crystals floating on the top.

That top layer, called fior di sale, is lower in sodium than table salt and rich in magnesium, potassium, fluorine, and is scraped off first. The rest is transferred to shore and left to dry in pyramid-style structures with tile rooftops. Farmers let the sun and wind slowly do their corroding work and harvest the crystals twice a year.

Today, salt is finding sweet uses. Chocolate-makers are adding fleur du sel to bittersweet treats to highlight the floral flavors of cru chocolates. I recently fell for salt caramels I found at Piere Marcolini in Belgium. Once home, I made some of my own.

The Gelateria Grom (scattered throughout central and northern Italy), has added salt caramel ice cream to its list of special flavors.

Since the days when Pisa imposed a salt tax on the Florentine community, locals have looked for ways to stretch salt. Dario Cecchini in Panzano makes a salt with herbs and spices called Profumo di Chianti.

While Cecchini’s recipe is secret, I can offer you my take on Tuscan herbs with salt and my favorite quick recipe for a fun appetizer or snack — candied peanuts with sea salt. Enjoy.

Remove the rosemary needles from the branches and the sage leaves from the stems.

Spread out the herbs on a wooden cutting board, add the garlic and sprinkle with 1 tablespoon of sea salt.

Using a mezzaluna or large knife, chop in a rocking motion until the herb mixture is almost a powder. If the mixture seems too wet, add more salt.

Spread the mixture on a wooden cutting board and let dry over night.

When dry, the Tuscan herb mixture can be kept in a tightly sealed jar on your shelf. It does not require refrigeration.

Try creating your own blends. Change the proportions of the herbs or add thyme, lemon peel, orange rind, fennel seeds or even fennel pollen.

My friend David Lebovitz, author of “The Perfect Scoop,” is an exceptional Paris pastry chef. His mix of sea salt with caramelized nuts is addicting. Consider yourself warned.

— A sprinkle of coarse sea salt (or smoked salt).

In a wide, heavy-duty skillet, mix the peanuts with the sugar and water. Cook the ingredients over moderate heat, stirring frequently, until the liquid seizes up. It will take a few minutes.

At this point, the peanuts will get crusty and the sugar will crystallize. Everything will become dry and sandy, which is perfectly normal. Don’t worry; you didn’t mess up. Lower the heat and keep strirring, scraping up any syrup collecting in the bottom of the pan. Coat the peanuts as much as possible.

Just before they’re done, sprinkle the peanuts with a sizable pinch of flaky salt and a pinch of cinnamon or chili powder, if you want, stir them a couple of times, then tilt the peanuts out onto a baking sheet or a marble countertop.

Let the peanuts cool completely, then break up any clumps. Store in an airtight container, where they’ll keep for a week.