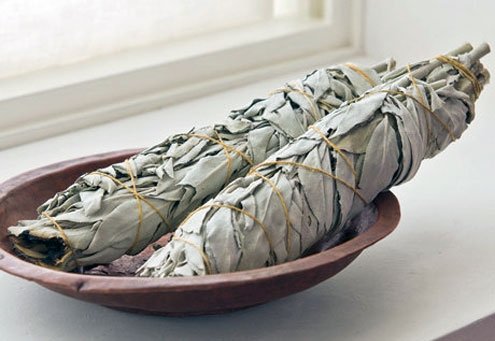 A few small branches of fresh sage in raffia.
M

y neighbor is what I call “booga-booga,” a technical term she approves of. With great seriousness and humor we discuss the possibilities of past lives, future lives, shamanism, herbal sorcery, witchery and the like.

When I was 16 I told a potential boyfriend that I was a practicing witch and, using the laying on of hands (oh, yeah?) and a few well-chosen magical words, attempted to cure his headache — or was it backache? I ended up having to soothe something that’s too often incurable — heartache.

Still, I love the unknown.

And here in France, I love that La Toussaint — Day of the Dead, All Hallows’ Eve, Todos Santos — is a very serious celebration of a family’s deceased members, beloved or not, one whose mood transcends its October placement. Halloween falls often if you think about those no longer around. The daily silence of cemeteries is broken by a quiet, reverent murmur of families bringing chrysanthemums to honor their dead. Sage branches should be among those bouquets.

A somber occasion, Toussaint, but also filled with mysticism and spirits and, for many, the brief return and possible encounter of the ghosts who reside in that other place, wherever that may be. In Mexico, for example, families bring to grave sites the dead one’s favorite food and drink, which is often mysteriously spirited away, so to speak, during the long vigil.

My garden is blessed by the gods of magical herbs, with a large area reserved for sage, a potent and healing herb used in so many booga booga encounters. In spring, the flowers attract bees that are nonexistent in other gardens, thus helping to pollinate my precious tomatoes and ensuring a fall and winter of rich soups and stews.

My kitty rolls in the sage and brings into the house a fragrance not unlike the turkey roasting on Thanksgiving. Each year use crumbled sage for my mother’s famous cornbread dressing for said turkey, stirring up the batter and so many sweet memories of those family gatherings in the past.

Perhaps it is the lore surrounding sage that lingers in my soul. When we moved into our newly refurbished house in France, I was disturbed by the fact that the clearly tortured soul who had lived here before us had died driving his car at high speed into a wall at a turn in the road leading to our village. He was certainly depressed and had suffered for years, attempting to find some relief in carving wooden sculptures of figures often resembling Munch’s “The Scream.”

I learned that he was a good man, an able man, a man loved by many. But who can know what fuels the sadness felt by a person disturbed by family woes, in this case those of a father. Who can know the unknowns of the soul?

With this poignant and moving history in mind, I wrapped a few small branches of fresh sage in raffia to make my magic healing wand (I’ve done this in every house we ever lived in) and let it dry. Once we were settled in, I lit it and walked with my husband from room to room, letting the fragrant and healing smoke cleanse the spaces of the previous family’s pain. I am both a believer and non-believer, but something healing happens when burning sage. Many cultures still use it. Does it work? I have no idea. But it remains my little ritual.

The beleaguered man who once lived here is buried in the small and lovely local cemetery. His Catalan family goes back generations, and his brother and sister-in-law brighten our days with fresh fare from their spectacular garden of delights. They are good, kind, decent, and funny people. Discreetly and lovingly, they tell us stories of his troubled life.

But they are also indirectly responsible for the fact we live in this peaceful, welcoming home, one whose disturbed spirits have clearly been put to rest, encouraged gently to move on with a wave of the sage wand. Sun now pours through our windows, sparkling after a sudden rain. We often take a moment (or more) to gaze out at the ancient, lush vineyards of the Roussillon, not far from the Pyrenees.

From time to time I think of taking chrysanthemums and sage to the man’s resting place. Despite the few details I know, he remains a mystery, a dweller in my unknown. I keep think perhaps my little sage wand might help him rest, in peace.