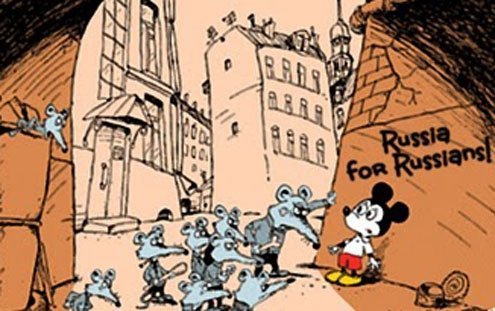 wo centuries ago, Russian historian Nikolai Karamzin traveled to Europe and returned a changed man. What he’d seen surpassed the prowess of any given state. For him, Europe was “the capital of the arts and sciences, the depository all the intellectual and human treasures accumulated over the centuries.”

Karamzin’s sentimentalism helped shaped 19th-century Russia. Revered by Tsar Alexander I, his vision of Europe acknowledged that retrograde, self-conscious Russia couldn’t acquire weight as a cultural entity without connecting itself to the social and political advances of the West. He didn’t so much want to borrow from Europe’s cultural heritage as ensure that Russia embraced and surpassed it.

The catalyst was a winning war against Napoleon in 1812. The victory was transformed into patriotic struggle between the young and old in which Russia had manifest its destiny Russia as Europe’s heir apparent.

This sense of mission, fleshed out later under communism, put the backbone into rivalry between Russia and the West.

But Europe’s enlightenment values could go only so far. Russia’s archaic power structure, which shifted from totalitarian to the autocratic with little in between, gave enlightenment values little space. In fact, Russia’s view of the perfect Europe omitted the social institutions and the moral and humanitarian qualities that defined the West’s tumultuous evolution. While Russians dreamed of modernity, they were ill-equipped to furnish a functional system of institutional rules and relationships.

Faced with this reality, Russia decided to emphasize near-make believe contrast to make a case for its own uniqueness. The embrace of Europe was ironically completed through the rejection the West and by making resistance into a condition of Russian identity.

Russian traits and traditions became paramount and enviable, forever at risk from the encroachment by foreigners (witness Napoleon and Nazi Germany). Russia knew the truth about its fakery and facades, including massive illiteracy and the fiction of the rule of law.

As the gap between utopia and reality widened, intellectuals despaired. “Russia is a necropolis,” a cautionary tale for state-builders, wrote philosopher Pëtr Jakovlevic Caadaev in the 1830s. Yet the worse things got, including political and ideological isolationism, the harsher the allegations Russia’s woes could be traced to “Western blindness,” as poet and critic Dmitry Venevitinov once wrote.

Russians learned to denounce the source of their original hopes as a source of national meaning.

Under communism, which all but sealed off Russian society, these cumulative resentments turned into phobias. Russian self-consciousness got further ammunition as backwardness persisted (and criticizing backwardness has always been a Russian masochistic pleasure, indulged by the likes of Alexander Pushkin and Mikhail Bulgakov).

The anti-West complex extended to ethnic stereotypes, allowing Russians to filter out foreigners and pick their enemies. National defects became cardinal virtues. Europeans might be civil, rational, industrious and energetic, but they were also cold, formal, closed, hypocritical and, later, computer-like. While Russians might live in poverty, they remained open, kind, emotional and passionate. Why emphasize material possessions and wealth when true Russians possessed an authentic spiritual dimension?

As a result, the “authentic” Russian character was sucked from the city and located instead in some fantasy countryside province blissfully untouched first by capitalism and now by globalization. Such a “civilization” naturally required a protector, whether named Leonid Brezhnev or Vladimir Putin. But despots do little to accelerate social organization and administrative independence.

The one-time idealization of Europe was most fully transformed into loathing and a hatred of cosmopolitanism under Stalin. Isolationism, xenophobia, and the literal and figurative impoverishment of daily life endured from the 1920s to the mid-1980s. At home, Russia was made to seem by as the mother of all inventions. It had invented everything, a fiction sold for public consumption.

Though collapse of the Soviet Union promised a change in course, it was ephemeral. Russians admitted their system had hit the wall. Between 1989 and 1993, critics of the Soviet system blamed it for deprivation and mass apathy. Russia briefly opened to world for the first time.

The problem was that most Russians had no idea about the structural meaning of democracy, the rule of law, inalienable human rights, and freedom itself. Instead, they sought refuge in the form of well-being. Advocate of political and media pluralism were outnumbered by people who wanted to live better lives and defend themselves rule by the arbitrary.

Those heady years saw Russians aspire to cooperation with Europe and express a willingness to share and learn. Europeanization lost its fear factor. Even the United States played to good reviews.

Stripped of its imperial and Communist pretenses, Russia could no longer pretend glory. What kind of superpower could Russia be in fact when countries were offering it humanitarian aid? How could it celebrate a way of life when loving standards were hardly better than those of a developing Asian or African nation?

But the fervor paid no heed to the stubbornness of the country’s authoritarian power centers, which remained stable. The sinecures of the political class, bureaucracy, police, army, judiciary, and the public education system remained unchanged.

Backlash against the fleeting post-Communist moment began with growing economic woes and grew as the free market turned out to be anything but. By 1995, Russia’s imperial tilt had reappeared, coupled with the retrenchment of the “nomenklatura,” the Soviet-era bureaucracy. Reformist parties lost their footing. Nationalist parties repudiated democracy and reformist by accusing them of selling off Russia’s national wealth to foreigners. It was an easy sell.

The specter of “surrender” to the West returned. With increasing frequency in the mid-1990s, West-haters made their case for an assortment of foreign conspiracies.

The fall Soviet system, not to mention its defects, was assigned to enemies of the state. Following the 1998 economic crisis, which humbled the whole of the Russian currency system, views of Soviet disintegration were definitively altered to reflect conspiracy theories that pit sinister Western forces alongside Russian reformers. These plotters, and not intrinsic Russian chaos, had brought the country to its knees.

Such theories underpinned the rise of Putin, who took over in 1999 and was officially elected a year later. Putin and former Foreign Minister Yevgeny Primakov were both member of Soviet-era intelligence services and were expert in supplying traditional anti-Western propaganda with new slogans: “Russia Rises,” “Russia From its Knees to its Feet,” “Russia Returns to its National Roots.”

The propaganda demanded an “increased role of the state” in national affairs. Talk of democracy and universal human rights was replaced by an insistence on orthodoxy and a patriotic education. Russia only allied, its citizens were told, was its own army and navy, putting the West’s back into the center of the threat matrix.

Distrust of Western nations peaked twice, once in Munich in 2006, when Putin aggressively accused the West of meddling, and with the Russian-Georgian war of August 2008, when Europe objected. Its criticisms were immediately used to confirm of the prevalence of anti-Russian sentiment.

There are no quick fixes to Russia’s fiercely ambivalent attitude toward the West, in part because few Russians have direct insight into day-to-day life in Europe. Information on Europe in the Russian language shares much of the bias that flourished under Soviet rule.

Only a fifth of all Russian population have even traveled abroad, and a third of those who did visited “socialist community” nations in Soviet days. Misleading as well is the popular notion that Europe is teeming with rich Russians. Affluent Russians are few, with most coming from large cities. Many reside abroad. More casual tourists head to Turkey or Egypt on vacation.

In fact, most Russians form their views of the West based on mass media, film and educational literature, most of which play to old stereotypes. As a result, organizations charged with incompetence or corruption often flaunting patriotism and foreign threats as a defense, further undermining basic civics.

According to polls, 35 percent of Russians still oppose Western-style democracy. They are composed mostly of rural poor and high-income bureaucrats, unlikely bedfellows but both schooled under communism.

Notwithstanding willful resistance, most Russians still seek the normalization of ties with Europe, particularly in culture, technology, and tourism. Overall, totalitarian consciousness is losing traction, though not as fast as many might like.

When Europe becomes concrete, offering programs and exchanges, suspicion melts away. Behind closed doors, Russians openly acknowledge the necessity of durative economic, social and cultural ties to the West. If anti-Americanism has grown, the attitude the European Union is respectful. Some even hope for eventual EU membership.

Despite its remarkable endurance, Russian enmity toward the West mimics how the poor once resented big cities and their glitzy inhabitants and fancy cars. The resentment and envy helped gave the critics their identity. Despite the hecklers, Europe is on everyone’s private radar.