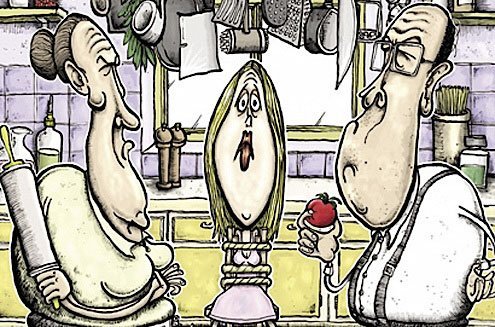 hen an Italian takes his girlfriend home to meet his parents, a relationship is getting very serious. It means you’re the one. Marriage follows, and, if you can afford them, 10 kids. Which is why first impressions are everything. But winning over Italian parents, for an americana, can be particularly challenging. Looking back on my first encounters with my boyfriend Fabio’s parents, I wish I’d had a “how-to” guide. Here are some lessons learned.

Never try to show up your boyfriend’s mother in the kitchen.

Fabio’s mom is (of course) an incredible cook. She finesses every ingredient. When I met her early on in the relationship I was still an amateur but learning fast. She asked me what I liked to cook for her son and what he liked to eat. Trick question, though I didn’t know it at the time. Proudly, I told her that Fabio loved my chicken salad. I didn’t know the unwritten rule that I should never even insinuate that my cooking was remotely as good hers.

“My son doesn’t really like your cooking,” was her response to my remark. “He only eats it because he has the occhi dell’amore.”

Strike one. I was speechless. Worse was to come. His zia asked me what exactly was inside my famous chicken salad. Nervously, I said, “Pollo (chicken), maionese (mayonnaise), mele (apples), cipolle (onions), uva secca (grapes), and sedere.”

Always be ready for tough questions.

When you least expect it, you’ll be put on the spot. During my first few weeks in Italy, my boyfriend’s parents visited Rome from Calabria and were lunching at his brother’s house. After lunch, Fabio watched soccer and his mother invited me upstairs to see her granddaughter. Warning signals should have gone off but they didn’t. Suddenly behind closed doors I faced mother, brother’s wife and her mother. Fabio’s mother began: “Sembri una brava ragazza. Sei molto intelligente. Ma, sei veramente innamorata di mio figlio?”

“What do you think about two people who live together before marriage?” she asked (still apartment-hunting, I was living with him). Before I could answer, she offered her opinion: “Perché secondo me, non è una cosa giusta.”

All the while, boyfriend Fabio is watching calcio, clueless of the interrogation.

Then both mothers ask me if I’m serious, what my plans are in Rome, and express their concern that Fabio won’t be able to concentrate on his career because he’s distracted when in love. Finally allowed to talk, my answers tumbled out all at once. “I came to Rome to study. Yes, I’m in love with your son. My thoughts on marriage are that I would like to be married some day, though not now. And yes, I do plan to look for my own apartment.” Then I bit my tongue: “Two people should not live together before marriage.”

There was a pause. Then, in unison, they said, “Brava!”

Accept it. Your business is everyone else’s, punto. Case in point: Fabio and I once argued because he hadn’t helped me look for an apartment. I was at his home in Rome. He was in Calabria working. Mexican-American hot blood that I am, I hung up on him and refused to answer his cellphone calls.

Next comes a call from his zia (in Calabria) to me, which is answered by Fabio’s mother. So much for discretion. Before handing me the phone, she says, “Ma che è successo? Perché mia sorella ti vuole parlare? Mah! Non ho capito.”

Great, now I’m really in for it.

I gave in and made peace. The next day, his entire family was busy calling me to say, “Sei brava Nicole. Hai fatto bene. Siamo con te.” Mamma mia.

Italians are deeply proud of their regional origins. A tomato, for example, tastes better in Calabria. Don’t argue. Reggio Calabria is truly beautiful, especially in the summer; that’s a fact. Fabio’s father has shown me Bovalino, his town’s lungo mare.

You’ll get TLC if you’re ill.

Hit with a terrible stomach virus last winter, I was very weak to the point of fainting. Fabio’s mom, also ill, to the rescue: She and Fabio picked me up, put me on the sofa and wrapped me with like five blankets. I was shivering with chills, high fever and had no sensation in my feet. She began massaging my feet and legs. Then, she spoon-fed me sugar and water, a personal remedy. Then, bless her heart, she gave me a shot of antibiotics.

She sat by my side the whole time repeating, “Stai tranquilla tesoro. Non ti preoccupare. Sono qui con te.” The next day she cooked me the classic riso con parmigiano. I had to eat everything in bianco, to help me recover.

I cried and thanked her. I didn’t have my mom here. She’s miles away in Miami. But that day, she filled her shoes just nicely. Grazie Signora.

— Take in every “ah bella!” or “principessa” compliment you get, because after a few months they dry up.

— Do the passeggiata, it’s fundamental.

— Learn to love calcio, because about 80 percent of all men in Italy obsess over it.

— Expect to come in third. First comes calcio, then mamma, then you.

— Lower your expectations when it comes to fashion. Tacky is often considered fico here.

— Think about modes of transportation. Taking the notturno bus after a romantic evening can be a drag.

— Don’t ever ask your Italian boyfriend (especially southerners) to do the dishes, or else you’ll hear it from the mother.

— Never cut your spaghetti with a knife.

— Having coffee with the opposite sex, even a colleague, is unacceptable.

— Never send your food back in a restaurant, even if it tastes like old meatloaf. Italians find it insulting.

— Don’t expect the man to pay on the first date. A lot of men do it Dutch.