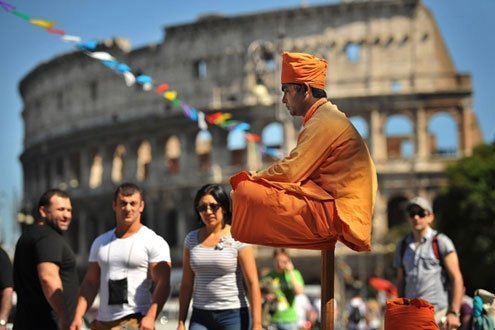 Rome can be both strange and entertaining, but keep tourist inclinations away from matters of food.
D

ining in Rome, a richly culinary city, has always presented a multitude of possibilities. But the lure of beloved cooking can produce and equal and opposite reaction if things don’t go as planned: profound disappointment.

Every city demands that you learn a little about its food and cultural scene before taking the plunge. Since Rome is quirkier than most, my first advice to travelers is that they study local habits, customs, and traditions, and also make an effort to learn a few words of the language. The more prepared you are, the less you’re surprised, and prone to paranoia.

Italians are easily flattered. They’ll go out of their way if they see a foreigner willing to accept local ways rather than guard against them. Remember that.

Here’s my shortlist of tips on what to avoid and look out for when eating out in Rome. Some of the points also touch on more general issues that can bring down an entire trip.

Avoid “Evergreen” restaurants: These places feature “tourist menus” in a multitude of languages, many with strange photos of badly styled food. Many often station waiters outside to help reel in customers. Though off-putting, they still teem with disgruntled tourists, their noses planted in guidebooks, many seeking an enlightened food experience they’ll never find in such a place. Be observant. If no locals are in the dining room or patio, go elsewhere. If your neighborhood is dotted with similar looking restaurants, all featuring tourist menus, extend your range. Find a place where you can choose a few characteristic dishes from a small, well-balanced menu.

Beware Technicolor: Blue gelato, bright orange and pink flashy checkered tablecloths, and UVA-tanned wait staff do not make a quality meal. The colors a place chooses and the way it welcomes its patrons is a crucial window into food and service quality. Colored gelato means chemicals and air have been pumped into the frozen delight. Cheap polyester table settings, paper napkins and gaudy colors tend to distract and divert attention from dubious dishes. Attention grabbing tricks can also mean carelessness in the kitchen. If your especially friendly waiter (with plucked eyebrows) is fixated on your cleavage there’s a good chance he might fumble the order.

Note positioning: Avoid eateries and cafes near major tourist sites and monuments. Though the term touristy can be misleading, it’s sad but true that some of the worst meals in the city are often served near popular spots. Cheap ingredients, poor quality service, poor hygiene, and inflated prices are the unfortunate norm. There are exceptions. Armando al Pantheon, only 10 steps from the architectural wonder, serves some of the city’s best cucina romana; Caffè Propaganda , a three-minute walk from the Coliseum, offers fine pastries and boasts a good mixology department; Baccano, a block from the Trevi fountain, serves up fragrant breads and excellent pasta dishes.

Pay attention to attitude: If you dust grated Parmesan onto your seafood risotto while sipping cappuccino, a waiter may grimace. If so, it’s not because he doesn’t like tourists (he actually loves them) but because you’re not leaving your comfort zone. You’re eating I-talian as you would at home. You may also run into the occasional aloof waiter, the shrugging chef, or the haughty host. This is where Italians are often misunderstood. If a waiter looks annoyed while reciting the day’s specials, don’t flinch. He may well break into a toothy smile after taking your order. He may also “forget” to charge you for your extra amaro. Overseas clients accustomed to overly obsequious servers misunderstand or misinterpret the Rome attitude. Restaurant staffs generally work on a no-nonsense basis and treat customers accordingly. The information they share is often direct and to the point. The smiles are real and the offer to help genuine. But bad moods, stress and informal attitude can come in the same package. So, if you’re in a mom and pop eatery and they’re having a bad day, the food will be great but you’ll also experience the family vortex, including slammed doors and banging pots. It’s part of the charm of the authentic “home-style” experience.

Keep it local: If you’re in Rome but want Sicilian cannoli, don’t be disappointed if ricotta and candied fruit tubes aren’t on the menu. Bolognese is great in Bologna, but you’re not in Bologna. You’re in cacio e pepe territory. “When in Rome” isn’t just a saying. Go for local cuisine, choose regional specialties, and don’t think all Italian food is alike. Each region has nuances and subtleties. If you’re in a specific city, find its specialties and revel in them.

Seating vs. standing, the coffee dilemma: Enjoying espresso in Italy can stun foreign visitors accustomed to a Starbucks ethic. Caffè here is about taste and energy levels. It’s a break, not a pause. It’s not a slowly sipped indulgence imbibed while reading the paper or working online. There is no “to-go” cup, no tall size, no taking your time, no drinking coffee in the car. Ever. When you go to a “bar” for a coffee, you stand at a counter and knock back the ristretto. The end. Money also plays a role. Table service carries a charge. With a few extravagant exceptions, coffee prices in Rome are fixed. But in tourist venues, table charges can go through the roof, particularly if the tables are curbside (or in upscale hotels). Do as the locals do: stand, sip and save.

The tip, cover charge and servizio: Yes, you have to pay for bread in Italian restaurants. But the coperto (cover) charge may or may not appear on the bill. Why? It’s no longer legal. Check the menu small print. Some law-abiding owners no longer charge for bread. Typically, however, you’ll still pay about €1.50 to €2.50 for a basket of bread. What to do? Shrug, pay and drink the limoncello.

Then there’s servizio, or the service charge. Waiting tables in Italy bears no resemblance to how it’s done in the U.S. Italians feel no pressure to tip. Nor do Italian waiters expect tips to reflect a specific percentage of the cost of the meal. Tip money — if any — usually ends up in a communal pot that’s divvied up at the end of a shift. Waiters hired in nero (off the books) don’t pay taxes. Waiters who are registered employees do, but also have paid vacations, sick leave, and free healthcare. That doesn’t mean tips don’t help round out a paycheck, but the fact is that tipping in Italy is a sign of appreciation, not a must.

For those who shudder at this difference in approach, there are ways to adjust. If there’s a service charge on the bill, leave nothing anything on top. If there’s a coperto charge but the service has been good, reward it — but not at a 15-to-20+ percent. Rome residents usually leave a few coins, rounding up to the nearest €2-€3.