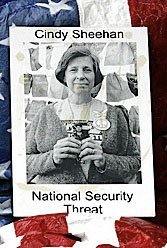 Cindy Sheehan: Not beloved on the right.
W

hat precisely constitutes an authoritarian state? Is it one where a government brandishes bare knuckles to suit cruel whims and commands obedience in the name of honor? Yes, says Webster’s. Nazi Germany was authoritarian. So was Stalinist Russia and Franco’s Spain. More recently you can cite Videla’s Argentina, Amin’s Uganda, Stroessner’s Paraguay, Hafez al-Assad’s Syria. It’s a long, long list.

What’s fascinating about the United States in this, its terrorist season, is how uncritically it embodies a modified definition of authoritarianism, one in which deference and civil obedience personify reactionary notions of authentic citizenship.

The New York Times recently released audio tapes of emergency workers describing how they went about their gruesome tasks on September 11. One voice belonged to John Rothmund, an EMT technician who found himself lost amid the hulking debris. “No brass,” he said. “So me and my partner tried to find authority figures and there was really none around.”

Much of what has occurred in the United States since then has involved filling the Rothmund void — anointing the vitality of brawn. Foreign policy has turned righteous and demanding of compliance. Domestic response to terrorism wrings threat from suspicion, often erroneously. Coercion has become rigor’s bedfellow.

So it’s a wise thing these days to stay on authority’s right side.

University campus dissent against the Iraq war is far softer than similar protest against Vietnam four decades ago. The reason is twofold: There’s no national draft, and therefore fewer college casualties; the war has little immediate impact on campus life. At a more basic level, deference toward authority complicates the nature of protest itself. Locker room griping is well and good, but more open challenges are framed as attacks on American institutional order and national security.

Isn’t that what terrorists did on September 11?

Another piece of the puzzle emerges in regard to Cindy Sheehan’s Crawford, Texas vigil against the Iraq war. Sheehan lost a son there. Again, by Vietnam standards, Sheehan’s protest is thoroughly tame.

Yet setting up an anti-war mini-camp at President Bush’s ranch has still delivered her into a tempest. It takes so little nowadays.

The curious examine her as an aberration: Anti-war protests in the United States so far have so far been undistinguished. Some just want to know how it’s done, others are fascinated it can be done at all. Nonconformism and lowgrade civil disobedience are rusty cogs in America’s democratic machinery.

Sheehan’s detractors, meanwhile, have typically major-market pedigree: A Fox News commentator has called her behavior “treasonous”; public dissent in a time of war, said Bill O’Reilly, aids the enemy, emboldens terrorists and is just plain bad news (translation: “Don’t ever talk back.”) For cynical political operatives, Sheehan is dismissed as a made-for-TV contrivance designed to jolt progressive thinking. Her mourning and her war views are irrelevant.

But one reporter Anne E. Kornblut, writing from Crawford in The Times, inadvertently hit a nerve. Kornblut correctly called the anti-war movement “scattershot,” adding that Sheehan had triggered resentment “from those who say her son’s death does not give her the authority to criticize the war.”

In the 1960s, using the word “authority” in such a context would have struck readers as inappropriate. Then, dissent, applauded or deplored, extolled America’s freethinking genes, sacred and well beyond authority’s reach. Disobedience reminded citizens they required no permission to object. Authority failed to monopolize any one right way.

That has changed profoundly.

To suggest that Sheehan might, to some, lack the “authority” to protest a largely unpopular war is symptomatic of a role reversal in which executive priorities are pre-eminent beyond mass dispute. Civil rights have been drained of their compelling qualities while authority has been redefined to include an expectation of deferentially respectful behavior. Rights, in the canon of popular neo-nationalism, are those that the governing authority expects, likes and approves of. A good citizen honors authority by standing down from challenging it. Dwell on homeland security long enough and the quest for order and reassurance whittles down criticism.

With the foreign affairs and anti-terrorism debate often billed as complex beyond popular understanding, many Americans also sense they are too inexpert to object (when the best objection to any war, ironically, is the common sense that addresses its evident flaws.) Others are cowed by authority’s post-9/11 swagger.

The United States is a deeply distracted society ill-suited to doubt, let alone disown, the promotions and pretensions of a conservative government at war. The result is an authoritarianism of spirit that diminishes protest and berates its safeguard role.

American obedience has escorted American authority to the highest level of institutional reach. The fallout from this deference will endure for decades.