The roots of the matter 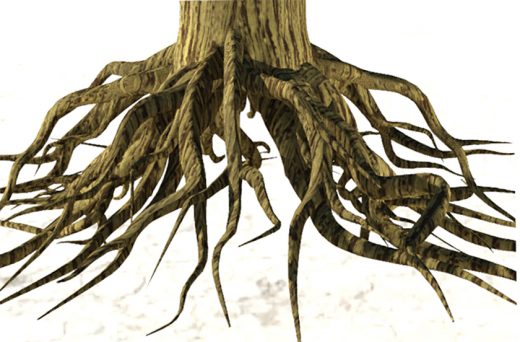 What is underneath will soon make itself known in one way or another.
U

no tira l’altro, or “One pulls another.” While this Italian expression may sound like an Iron Curtain slogan —“One pulls another; the proletariat brings the nation to prosperity” — it’s in fact an Italian phrase used to describe compulsive (and unstoppable) urges, like gorging on snacks. It’s no surprise “One pulls another” was an Italian snack-food company’s advertising slogan for years, much like Jay’s potato chips’ decades-old “No one can eat just one.”

The Italian saying came to mind the other day as I tried to drag myself away from weeding in my New Hampshire garden. Every time I gathered up my tools with the intention of quitting, another dandelion would catch my eye. An hour later, I thought to myself that the dandelion would be gone, along with all the weeds around it.

As I uprooted offending plants, it dawned on me that the guiltless sadism of ripping green invaders out of the earth offers a complex set of lessons about life, living, and people.

Let’s begin, very literally, with roots themselves. The only way to effectively eliminate a weed is to pull out its roots. So, it’s hardly a surprise that in every language I know, “to uproot” suggests the complete annihilation of something long-standing.

You uproot the causes of evil or “root out” corruption.

In every language that I know, “to uproot” suggests the complete annihilation of something long-standing

Then there’s the question of what a weed really is, which has its metaphysical side. Defining a weed depends entirely on perception. When my sister complained about Lilies of the Valley invading her flower beds, I urged her to give me her discards. Like Christian Dior, who made the Lily of the Valley his trademark and was buried with them, I am delighted to see them spreading in the land around my house.

A friend in Rome told me that when she was a child, her family used Sunday drives into the country to gather an edible weed that grew near roadsides. When former President Barack Obama once commented about the price of the same plant at a pricey Whole Foods supermarket chain, he was branded an out-of-touch elitist. The plant was arugula, which is essentially a weed that grows where you don’t want it to.

In broader terms, this concept of unwanted weeds in need of removal has had dangerous social implications. Take Hitler’s view of Jews, or Joseph McCarthy’s eagerness to hunt down Communists. It might now be appropriate to include what’s happening on America’s walls-against-weeds southern border.

My morning of weeding also provided insight into four kinds of survival strategies and the humans that choose them.

Once again, it came down to roots.

The hard-to-pull dandelion has one big root that runs deep. Dandelion plants occasionally clump together, but are more often robust loners. The design of dandelions’ single flower, which spreads its seeds far and wide, makes up for it being a lone wolf.

Plants that take the opposite approach have hundreds of tiny roots that form a hidden network and produce a resistant mat. Taking out one of these means taking out dozens and tearing up everything surrounding them.

Another plant strategy is to create a root that is a vine, and vice versa. These menaces look deceptively like single plant stalks. As soon as you pull, dozens of other little plants tremble. This because they are all hooked up to a single strand that surfaces and dives below the soil with the impunity of a German U-boat. It takes the doggedness of a wily submarine captain to latch onto these roots and follow them wherever they go.

Then there are outwardly hostile plants including poison ivy or raspberries. Both defend themselves with contaminants and thorns. Poison ivy is the plant world’s answer to people you should best avoid altogether. Raspberries are like those whose bad qualities are worth tolerating if you want to enjoy their sweet side.

Poison ivy is the plant world’s answer to people you should best avoid altogether. Raspberries are like those whose bad qualities are worth tolerating if you want to enjoy their sweet side.

“Mighty oaks from little acorns grow,” goes a saying. This is indeed true. But it goes beyond oak trees. Last year we had a bumper crop of acorns. This additional food led to a bumper crop of squirrels. So abundant was the nourishment that they raised not one but two litters. The abundance of young squirrels seeking new homes helped fatten up local raptors. The numerous acorns also nourished mice, whose tick-hosting population also increased. Even Mother Nature can’t escape the law of unintended consequences.

The oak may be the king of trees, but its babies, which grow directly from those cute little acorns, are weeds that are, as you’ve learned, hard to uproot. Baby oaks must be extirpated in their first season (and “extirpate” is another word whose root is in roots).

After that, all you can do is cut them down every year. The oak has won.

In contrast, even a yard-tall pine is easy to rip out. Why is that? Shallow roots. The pine’s survival strategy, unlike the oak’s, is speedy growth. Should we be surprised that fast-growers, known as softwoods, are associated with cheap furniture, such as the Ikea line? Expensive antiques generally emerge from oak and other slow-growing hardwoods. The lesson of oak vs. pine extends to friends, institutions, and even to wealth.

If there’s a final lesson to be learned about weeds, and their offspring of baby trees, it’s that Nature sows a lot of them, but very few survive.

Those that do grow into lovely trees on my land owe their lives to a combination of favorable conditions, luck, and my ability to break the cycle of uno tira l’altra.