The Roman girl and the Gherkin 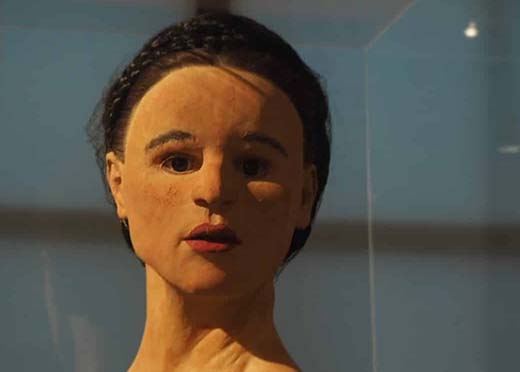 A reconstruction of the Roman girl's head, based on her skull and DNA found in her teeth, is on display at the Museum of London. Her hair style is based on what is known about 4th-century style.
W

hen it comes to modern architecture, London’s dramatic skyline knows no rival. Its distinctive skyscrapers and towers are not only visually striking, but also enticing to the ear, given the amusing habit Londoners have of nicknaming the city’s most celebrated buildings based on their shape. “The Shard,” Renzo Piano’s 95-storey skyscraper in Southwark; the “Walkie Talkie,” Rafael Viñoly’s eclectic tower on Fenchurch Street, “the Cheesegrater” on Leadenhall Street, “the Scalpel” on Lime Street, the newly completed “Can of Ham” at St. Mary Axe, and, of course, “the Gherkin.”

Designed by the acclaimed British architectural firm Foster + Partners, and completed in 2004, the Gherkin, whose actual name is 30 St. Mary Axe, is located in The City, London’s Financial District. With its pointed, helicoidal shape and its glass, diamond-shaped panelled façade, the 40-storey tower has swiftly become a quintessential symbol of London. The building was awarded the Royal Institute of British Architects (RIBA) Stirling Prize in the year of its completion. The Gherkin rises on the site of the former Baltic Exchange building, once a venue for the gathering of information on maritime transportation markets, which was partially destroyed in a 1992 bomb attack carried out by the Provisional Irish Republican Army (IRA).

The remains of the Roman girl found at the “Gherkin” construction site were taken to the Museum of London, where they remained for 12 long years.

Everybody knows the Gherkin, but not everyone is aware that the building, which is for office use, is also home to the grave of a young lady who lived some 1,600 years ago, when London was a Roman settlement known by the name of Londinium, from which the present name of the metropolis is derived. Londinium, founded by the Romans in 47 A.D., was the centre of administration of Britannia. The composite population of the city included soldiers, sailors, merchants, artisans, and slaves, mostly Britons, but also from other parts of the Roman Empire.

In 1995, when the site where the Gherkin stands today was being prepared for the new construction, the skeleton of a girl between the ages of 13 and 17 was discovered. She had been buried in supine position, with her arms crossed over her chest. It was established that she lived and died in the late 4th century A.D. No other bodies were found in the surrounding earth, which seems to indicate that she hadn’t been buried in an established cemetery. As per the Roman tradition, cemeteries were to be located outside of urban areas; Londinium’s cemetery was in the area that is now known as Spitafields. This is virtually all the information that archaeologists were able to retrieve from the remains and the few pottery fragments found next to the skeleton.

The remains of the girl were then taken to the Museum of London, where she remained for 12 long years. In 2007, three years after the 30 St. Mary Axe was completed, it was decided that she should receive a proper reburial in the same place she had been found, a “human gesture,” as the managing director of the Museum of London, Taryn Nixon, put it. “While we will probably never know precisely who this young Roman Londoner was,” she added, “it is an elegant and fitting reminder of the City’s rich layers of history, for Londoners of today and tomorrow.”

After a memorial service at St. Botolph’s Church in Aldgate, which was attended by the Lady Mayoress of the City of London, the Londinium girl was reburied at the base of the Gherkin, giving her a final place of rest.

On Bury Street, on one side of the tower, Londoners and visitors can pay homage to this anonymous Roman girl. An inscription engraved in dark gray marble reads:

“To the spirits of the dead
the unknown young girl
from Roman London
lies buried here.”