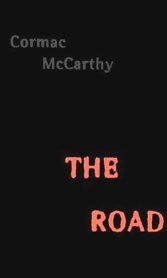 McCarthy’s irrefutably American novel is Walt Whitman’s “barbaric yawp” muted and made barbaric alone. In a post-apocalyptic time situated indefinitely between a ruined future and an imagined memory of the Tamerlane Dark Ages, a man and his young son stripped bare of everything but piecemeal humanity travel south in hopes of survival. Their Hieronymus Bosch journey is hindered foremost by hunger, but also by strange beasts, hooded looters, roving cannibals, and slowed also by a cold ashen rain that has sucked the blue from the sea itself. What has happened to the cindered planet, or when, isn’t clear. Nor does it matter. Nothing here hews to a specific geography. What stands upright is the slow passage of a pistol-toting man and his frightened boy, the elder and the younger, father and son like artists of old, each trying to sustain a modicum of compassion while eluding marauders who roast infants on a spit. They are good guys, father tells son. They are at one with “The ponderous counterspectacle of things ceasing to be,” a frontier-style realm carved from a bomb shelter.

Assigning sci-fi or southern Gothic labels to McCormac’s Pulitzer Prize-winning tale a sci-fi is fine: Each fits, though none snugly. As 1880s Whitman celebrated the loud and self-absorbed boisterousness of an America getting both modern and confident, McCormac, a poet at heart, strips those grand gears and forcibly chokes his country and planet on its own 21st century bones. No black hole suffices to contain the whole awfulness of the road; nor is any heavenly horizon bright enough to contain the perfect compassion that McCarthy’s coruscating, comma-less prose brands indelibly into the hearts of lost souls.