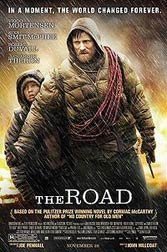 Stripped of its post-apocalypse moorings, “The Road” is Cormac McCarthy’s poignant ode to a father’s transcendent love for his son. Australian director John Hillcoat, aware that bringing McCarthy’s verbal sorcery to the screen is a bridge too far, confines himself instead to loyally following novel’s undercurrent.

In a future time following a global conflagration, when a dank, crepuscular grey is all that remains of sunlight, a father (Viggo Mortensen) tries against all odds to follow the wishes of his wife, long ago vanished, and navigate his son (Kodi Smit-McPhee) south to the sea, where perhaps some of the planet’s remaining “good guys” may still live.

Bad guys, including highway robbers and cannibals, are the order of the day and the reason why the man’s wife (Charlize Theron) chose walking out into the hopeless night as her form of suicide. Now it’s just man and boy, foraging for food while pushing a shopping cart, with finding canned goods a cause for celebration. Hillcoat’s tone poem is given substance by Mortensen, who looks like an emaciated Walt Whitman but rarely raises his voice. The androgynous Smit-McPhee is his loyal companion, by turn afraid, curious, clinging, a boy like any other boy but under incomprehensible circumstances. Robert Duvall is a brief beacon as a beaten down Tiresias who has lost everything but his memories.

But the star here is the infinite twilight, with some of the action filmed appropriately in the charred wilderness around cinder-laden Mount St. Helen’s, which erupted in 1979. There is little relief from desperateness, aside from papa’s love, which is how McCarthy would have wanted it. Nick Cave, a Hillcoat favorite, provides the soundtrack.