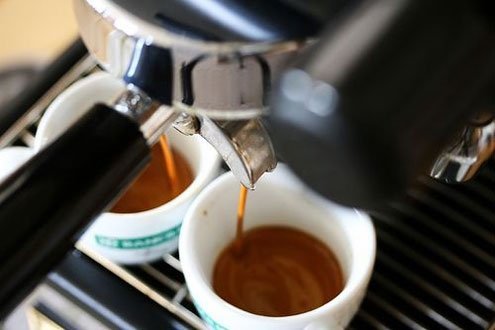 The cultural context of espresso is unrelated to America.
A

visit to London, Paris, Berlin or any of Europe’s most beautiful cities brings you face-to-face with the effects of globalization. City centers are filled with chain stores. Fashion has H & M, Guess and Calvin Klein, while Starbucks and McDonald’s take care of coffee and food. It’s tidy and banal.

Thankfully, Rome is a bit more traditional. Boutiques remain an important part of the center with most large chains concentrated in suburban mega-malls, which have reached gigantic proportions in north Italy. Though McDonald’s has made considerable Rome inroads (the first restaurant opened in 1986), Starbucks is nowhere to be found.

It’s an intriguing absence that not everyone’s happy about, as I found out after a little surfing. Social networking sites have announced the opening of Starbucks outlets in Milan and Rome, basically wishful thinking out loud. On Facebook, friends try to get signatures for a pro-Starbucks petition. Forums help you vent your frustration.

So, will it happen? Will Starbucks get the Rome and Milan outlets its fans so deeply desire? In fairness, not everyone is cheering. “As a happy American transplant to Rome, I don’t understand the Starbucks frenzy,” read one forum entry. “Do you even know what they serve? Italy has the best cafes and pastry shops in the world and you aspire to this crap! … Mah.”

Let’s take a step back.

When Howard Schultz became chairman of Starbucks in the late 1980s, his company owned a handful of coffee shops in Seattle. Schultz merged Starbucks with his own chain Il Giornale, and watched as the fast-growing franchise morphed into one of the biggest brand names in America. Starbucks now has more than 12,000 shops in 55 nations worldwide.

So why not in Italy?

Again, perspective helps. America has no Italian-style bars. The American bar, along with pubs and saloons, are associated with alcohol. Coffee is usually served in diners, hotels, coffee shops and delis, either on its own or as a food accompaniment.

Italian bars exist in a separate dimension and have an entirely different feel. They may serve sandwiches, but coffee is their mainstay. They are basically coffee stalls built into walls. Quality and detail matter. Italian owners have been known to name their bars based on their preferred coffee brand. Even cups can be branded the way beer mugs are in pubs. The specific coffee machine is significant. Some bar-owners swear by out-of-date ones that are completely hand-operated.

This brings us to culture. Italian workday life has little in common with its American counterpart, east coast or west. Italian bars are a three-minute social club. All day long strangers and regular customers meet and chat. People treat bar-mates as long-lost friends, no alcohol necessary. Italian bartenders are like intimate versions of those in American-style bars. They know their clients. They banter. They talk soccer. They rest on Sunday (more than a third of all Italian bars are closed on Sunday). Italian espresso is the best kind of cheap hit: 70 cents a cup, sipped while standing at the counter. It’s a hit-and-run ritual.

That’s because Espresso means fast. Think express. You can have it in a ceramic cup or a glass (in the first, it’s hot; in the second, it’s boiling). In Naples, a city that serves some of the best coffee in the world, temperature is fundamental. Once, while briefly chatting with a friend, my coffee cooled too much for the bartender. He tossed mine and made another. I didn’t say a word. It’s a matter of pride.

Espresso comes from infusing highly pressurized steam through coffee powder. Most popular are coffea Arabica and coffea robusta. Of the two, Arabica is the more prized. It has stronger flavor but less caffeine. Robusta is less flavorful but contains more caffeine.

The pressurized water that makes espresso what it is (and separates it from its American cousin) helps draw out the essential oils contained in coffee beans. Flavor beats out caffeine content. That’s why the surface froth comes out light brown. According to a Naples saying, you have a good cup of coffee if the spoon stands up straight in the cup. In American coffee, hot water is percolated, making the resulting liquid thinner. It also has less body, less flavor, and more caffeine.

Starbucks’ Schultz has attributed his success to mimicking the Italian “bar” way, which he said he learned while visiting Milan in the 1980s (his original Il Giornale was named after the Milan newspaper). Many argue that the reluctance of Starbucks to enter the Italian market has nothing to do with cash flow and everything to do with image. If Starbucks had trouble peddling their brand and style in Italy, the country their corporate leader insists inspired him, their global image might take a serious hit.

Personally, I enjoy the Starbucks mood. Unlike most Italian bars, it’s cozy and warm. It’s a place where you can read or surf (most stores have WiFi).

At the same time, I can’t imagine an Italians drinking long coffees in a Starbucks environment. Italians are loud and talk with their hands. They need room to gesture. Excited Romans in a Starbucks would be a recipe for spilled milk. So the wait continues.

To enjoy a good cup of coffee, you don’t necessarily need to go to your local bar. I make espresso at home every morning before going to work using my 4-cup coffee maker.

The moka pot, or macchinetta (first sold by Bialetti in 1933), is a small aluminum device that consists of the three main parts (see diagram): the collector (C), the filter (B), and the kettle (A).

— To prepare the coffee, fill the kettle (A) with water nearly to the level of safety valve. Then insert the funnel-shaped metal filter (B). Put the coffee into the filter, making a small pyramid. You then screw on the top, the collector (C), which has a second filter, and put the kettle on low to medium heat.

— Meanwhile, place a spoonful of sugar in a small cup.

— As soon as the first thick and oily coffee liquid emerges (about two teaspoons), pour in the sugar.

— Finally, using a spoon, stir vigorously until you get a thick and fragrant light brown mixture.

— Pour the coffee into cups and use cream to sweeten it. Welcome to an inexpensive and delicious cup of coffee, an expression of Italian experience.

If you’re a caffeine freak, consider that a cup of Italian espresso averages 50-to-90 mgs of caffeine, compared to 60-to-100 in the moka machine. American coffee averages 97-to-125.