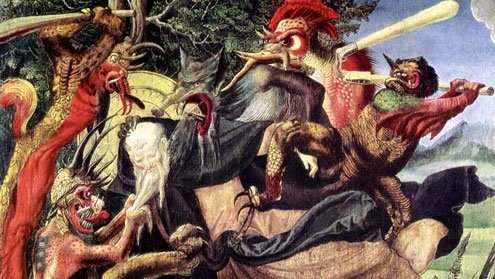 he word exorcism usually conjures up images made popular by Hollywood films — girls contorting in agony, their heads spinning 180 degrees while they laugh maniacally and curse in a gruff, demonic voice. Who can forget the scene of Linda Blair shooting split-pea-soup vomit into the face of the exorcist as he leaned over her? The reality of exorcism is very different, something I’d find out for myself in the winter of 2007 when I agreed to witness an exorcism firsthand.

At the time I was doing research for a non-fiction book I was writing on the subject (“The Rite: The Making of a Modern Day Exorcist”), the story of an American priest, Father Gary Thomas, who’d come to Rome to be trained as an exorcist.

“Why exorcism?” was the first question my wife asked me when I floated the idea of the book. Truth be told, I the subject also made me uneasy. There’s a reason why the 1974 movie “The Exorcist,” which was based on a best-selling book by William Peter Blatty, remains among the most terrifying films ever made. Many human beings in many cultures live with a deep-seated fear that there exist forces well beyond their control. If demons were out there, did I want one coming after me?

I got the idea for the the book in 2005, when I heard about a course entitled “Exorcism and the Prayer of Liberation” being taught at Rome’s Ateneo Pontificio Regina Apostolorum, a well-established, Vatican-affiliated university. My first thought was that it was just a P.R. stunt. A college level course on exorcism? It didn’t help to see the media hoardes on the first day, which only reinforced the course’s apparent circus-like nature.

But after a few weeks of attending lectures I started seeing a picture of exorcism that was very different from the folklore I’d been weaned on. More surprising was that many of the priests and nuns in attendance felt the same way.

When I first met Father Gary he had yet to witness an exorcism. In 2004, the Vatican had sent a letter to Catholic archdioceses around the world urging local churches to name an official exorcist — in part to guard against abuse.

Originally from San Jose, California, where he had left the mortuary business to join the seminary, later working for 15 years as a pastor at St. Nicholas Parish in Los Altos, Father Gary was named an exorcist in May 2005, which led to his enrollment in the Rome course. Then 52, he candidly told me he didn’t know the first thing about what he was supposed to do. In fact, he was actively seeking an apprenticeship with a working exorcist.

In following weeks we kept in touch, until one day he told me that he’d finally seen his first exorcism — a case involving a nun who’d “flopped around on the ground like a fish,” grunting and groaning (“Shut up, you stupid priest,” the troubled nun, Sister Janica, snarled at Capuchin Father Carmine De Filippis, who was conducting the exorcism). As Father Gary told me more stories and elaborated on the process, I quickly filled up my notebook. One woman had repeatedly slammed her head into the wall and another spoke with what he called an otherworldly voice. In another case, a frail woman had bent the legs of a metal chair.

As he recounted these episodes, Father Gary seemed just as amazed as I. It was then that I realized that his story would make a great book. I saw it as a chance to follow a novice exorcist on his journey from skeptic to believer.

After the encounter, I immersed myself in the subject, my desk accumulating books with titles such as “The Prince of Darkness” and “Satan.” I drove my wife crazy with constant ramblings about incorporeal spirits and the many ways in which the Catholic Church says a person can be cursed. I actually found it quite easy to detach myself from material concepts, a necessary part of probing the subject. I wanted to take an unbiased, non-macabre, almost scientific approach to determine just what the Church actually taught about exorcism.

My research ended up taking me places that I never thought I’d go. I interviewed 18 exorcists and several sufferers in and around Rome. Many seemed outwardly normal. It was hard to connect their appearence with the screams I heard emerging from the rooms where they met with priests.

During one interview a woman fell into a trance and began cursing a painting of Mary which she then tore down and stomped on.

I got my first direct exposure exposure to the rite and its aftermath at the church of San Lorenzo Fuori le Mura, adjacent to Verano Cemetery in Rome. The exorcist prayed over people in a room the size of a walk-in closet with only a few metal folding-chairs inside. I sat in a nearby waiting room along with seven other people, a few clutching rosaries and praying silently.

From inside the smaller room came the distinctive sound of a person’s head thumping against the wall (Father Gary said he saw this behavior often in extreme cases). As I edged toward the door I heard a gruff, guttural voice begin to shout and curse the exorcist followed by an ear-piercing “Basta!”

After the exorcism ended I was allowed to enter the priest’s office, where I saw a young woman lying on a small couch, her hair matted with sweat. An older woman companion sat nearby comforting her. The exorcist — assisted by two priests — had performed the rite in the tiny room, with the young woman then moved to the office to recover.

The priest instructed me to sit down on the couch beside the woman as he ushered two men into the smaller room (many exorcists in Rome perform the ministry like an outpatient clinic).

Sitting next to the woman was awkward. Moments before I had heard her guttural curses. I turned and mumbled a ciao, to which she smiled. Meanwhile, the smaller room had again turned into a den of strange sounds, with noises that sounded like wolverines on the prowl. Furniture was being overturned.

Afterwards, all those involved sat around for five minutes talking about my book project and the differences in the way exorcism is perceived and how it actually works. It’s a process, not a one-step, one-time healing practice — a “drive-through,” as one priest called it. There is no quick fix.

One of the priests who had assisted the exorcist mocked my Roman-accent and everyone laughed, including the young woman who had emerged from the session. The scene was very different from what I’d expected.

In the three years I spent writing the book, I would see more than 20 exorcisms, each one different from the one before it. Whether the bizarre events I heard and witnessed were the work of demons has no rational answer.

I talked to many psychiatrists and medical doctors, many of whom claimed to have seen inexplicable events in sessions with patients (such as instances of levitation and mind-reading). Some — including those familiar with epilepsy, schizophrenia and paranoid disorders — were convinced that what they’d witnessed defied conventional medical analysis. They were convinced, as Christopher Marlowe once wrote, that “Hell hath no limit…”

Most of the priests I spoke to were as level-headed as the afflicted were troubled. They did not proselytize. “People don’t understand what we do,” Father Giancarlo Gramolazzo, the president of the International Association of Exorcists told me. “People come to us and expecting to be healed right away. They think, ‘I have a headache because of the demon.’ ‘My job isn’t going well because of the demon.’ People are not properly informed.”

The official ritual of exorcism, I learned, specifically barred the exorcist from “talking” to the demon, aside from learning his name. The rite was not a cinematic “conversation” between a holy man and Satan. Instead, it was a process of attempted liberation.

Over time, the three-year process of researching and writing the book evolved into an edifying personal journey. The watching and writing process helped me to appreciate basic human interaction. Meeting Father Gary gave me new insight into selflessness and humility.

In many cases, the exorcisms I saw were performed in churches located in the heart of Rome. I always looked forward to the prospect of emerging from the dark and dreary interiors into the bustle of city life. It was a very visceral reminder that we’re all on this planet together, struggling to find answers, and hope.