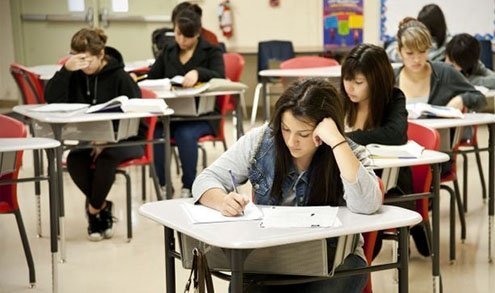 Why should this is the only "normal" way to study?
T

he fact that we’ve always done something a specific way doesn’t make it the best way. Too often, though, knowing that doesn’t stop us from expecting that those around us adjust their ways to ours, which we consider “right” and “normal.”

Here’s an example. Children are expected to sit in chairs for hours at a time with few breaks. We presume that learning should be done sitting at a desk. That’s been the pattern for centuries.

Yet studies on back disorders show that in both the short and long term, sitting on the floor is far healthier. Again, the established way of doing things — the expected way — isn’t necessarily the best one. Chairs themselves can hinder physical development. But what about the mental, social and emotional consequences of being forced to sit in them?

Let’s move from chairs to curriculum. Do we need to teach the alphabet and numbers at an ever-earlier age? In Finland, teachers (who earn more than doctors) are discouraged from teaching reading or arithmetic until age seven. Until then, they’re encouraged to take children on forays into nature, to have them create things with their hands, to ensure they interact in a group. The emphasis is on social, emotional, and intellectual development. When Finnish teachers get around to the three R’s — reading, writing and arithmetic — kids are ready for them.

Can children learn to read earlier? Of course they can. So what? Is it better? And who is it better for, them or us? Children have nimble minds. The Finnish kids who learn social skills first and reading and arithmetic later soon catch up.

Exploration and socialization once took place on the street and in the neighborhood. Today, that’s all but impossible. School takes up most of a child’s time. Work demands often make parents unable to be present when the school day ends. So school never ends.

All time is organized and accounted for. Children get home wiped out. At the same time, they’re still expected to sit for hours. Those who fail to meet that entirely arbitrary demand are somehow defective.

How many kids are prescribed Ritalin and Adderol because they can’t sit still? Millions. How many parents know (and acknowledge) these drugs are potentially addictive amphetamines? Few. What neurological evidence exists that the act of sitting still is a requirement for learning?

When I was in college, students would buy amphetamines from biker gangs to cram for exams. Now, some pediatricians prescribe them on the basis of a simple questionnaire. How scientific.

Do the drugs work? Yes, in most cases I suppose they do depending on how you define “work.” But is that what we really want for our kids?

I once counseled a 14-year-old kid with so-called Attention Deficit Hyperactivity Disorder (ADHD). When he first came to my office he repeatedly bounced up and down on the chair, twisting and fidgeting. But that changed after a few minutes of talking and listening. He suddenly behaved very much like my adult patients. I convinced him to let me talk to his teachers (he had little faith it would do any good, but agreed).

I was told he was forgetful and always in motion, that he was clumsy, disruptive, and distracted, often losing pencils. “And he is going to fail his tests because I can’t read his handwriting,” his teacher added.

I suggested she not make him sit constantly. “Don’t erase the blackboard, have him do it. Let him distribute papers. Send him on errands. And have a bunch of pencils on your desk that he can use.” If she made that concession, “he’ll never learn,” she sputtered. Plus, it wouldn’t be fair to the other students.

I took another approach. “If he couldn’t hear, would it be unfair to the others to have someone translate in sign language?” If his handwriting was so difficult to decipher, why not let him use a computer?

“But he has to learn to write. We have to teach him!”

I again tried a different perspective. If he forgot his pencil, he’d at worst become an absent-minded professor. Maybe, at 14, his handwriting was illegible. But like it or not, how many 21st-century professions actually hinge on the quality of handwriting? She hadn’t thought of that.

Here was a brilliant kid about to fail eighth-grade because he couldn’t write legibly, couldn’t sit for six hours at a time and was so interested in so many things he couldn’t focus in school.