The right to have rights 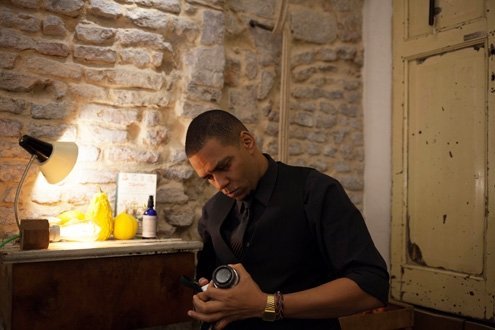 red Kuwornu is an Italian film director and producer. Born in Bologna to an Italian Jewish mother and a Ghanaian father, Kuwornu grew up in the northern Italian city and went on to study political science and mass media at the University of Bologna. He then moved to Rome, working as a writer for Italian state television, RAI.

Kuwornu assisted director Spike Lee on the 2008 movie “Miracle at St. Anna,” a story about African American “Buffalo Soldiers” in Tuscany during World War II. Fascinated by experience, Kuwornu began researching the military and social legacy of the segregated U.S. 92nd Infantry Division. This led to his first feature, a 2010 documentary called “Inside Buffalo,” which included interviews with the last living members of the 1940s unit. It was screened at the Pentagon, Library of Congress and received praise from President Barack Obama.

In 2015, he released “Blaxploitation,” a study of the history of black actors in the Italian movie industry. “I hope it can help build multiethnic and pluralistic film industry,” said Kuwornu, “one in which people from different cultural backgrounds are given a chance.”

The Brooklyn, New York-based Kuwornu was interviewed in Rome by Shaula Villadoniga. These are edited and condensed highlights of their conversation.

Tell me about the challenges faced by independent filmmakers. There are lots. The biggest and most common is funding. The budget for a documentary can be high, if you want to do a good job, that is — upwards of €50,000 to €60,000 for an okay job and distribution. Obviously, it’s hard to find that money, which is the starting point of any project.

There are also artistic challenges, media challenges and challenges linked how much autonomy you have. That’s why you need financial independence. Managing to produce it yourself allows you for a much more independent and probably more successful result.

What exactly made you focus on citizenship in your second film? It’s an important topic, and in 2012 it was making its way into the Italian political debate. Not just citizenship as a piece of paper, but also as a means to acknowledge the presence of the children of immigrants in Italy, a way to see them as a significant part of the new Italy, and, obviously, to reorganize the perception of the country’s social and demographic composition.

The real challenge of course is to identify the ways of creating a feeling of national inclusion. But the main goal of “18 Ius Soli” was to make people understand the social problems faced by children of immigrants, and also the financial consequences that arise from not granting citizenship to people born in Italy, or who arrived here as infants.

Would you say the existing ius sanguinis system undermines the enjoyment of fundamental freedoms? Does it make children of migrants more vulnerable? I wouldn’t say it necessarily generates a negative impact. The way I see it, the system needs to continue. It can’t be abandoned. If, for example, an Italian family moves to another country, lives there for two years and then decides to return, it’s fair that their children to be granted a citizenship based on ius sanguinis. So it has its own importance.

At the same time, today’s world puts more focus on territorial law than the amount of time a person has spent in that territory [editor’s note: the U.S., Mexico, Canada and Britain all base citizenship on ius soli, or territorial law]. Modern countries need consider this “space-time” dynamic.

“18 Ius Soli” showed the psychological impact a limbo-like status can have on kids born and raised within the European Union. Most of them said they never thought of themselves as non-Italians until they started high school and faced travel problems. They said they felt discriminated against because, unlike other Italian youth, they’d have to start working or attending university as soon as they turn 18 or risk becoming illegal in the country where they were born.

Do you think the people you interviewed saw all this as an actual limitation to their freedom of circulation and their access to cultural and social rights? Most were very young and probably couldn’t see the legal limitations being placed on their freedom. Most young people (sometimes adults, too) aren’t really clear about their rights and duties. They don’t see the repercussions of their legal status in terms of future opportunities. They’re more concerned with immediate issues such having to get a residence permit to live in Italy even though they were born or grew up here. These permits need frequent renewing, sometime annually, like the ones held by foreigners, migrants, refugees, foreign students, and foreign professionals working. These are groups the kids do not recognize themselves as belonging to. They see being treated that way as huge injustice. As the years pass, and they’re forced to start dealing with paperwork and bureaucracy, they start realizing the actual limitations to their freedom of circulation and the possibility of planning a future.

How do you think having to apply for a residency permit (permesso di soggiorno) in your native country affects your sense of national identity? In my view it can easily be the first step to someone feeling they don’t belong … making the construction of both a national and individual identity turns into a far more difficult process.

Many children of immigrants, especially those born into a family in which mother and father have different citizenships, grow up with a transnational identity. They’re a lot more flexible. There’s a lot more they can understand. Yet it’s still important that these kids have time-space point of reference, a national identity, which they get in Canada, the United States and Britain.

Only Italian speakers are likely to notice your documentary tends to focus on regional identity of the people interviewed. Do regional dialects, accents and traditions play a particular role? What kind of impact does it have on Italian audiences? Yes, dialects are important. Italian identity is still under construction. Italy, as a republic, is only 150 years old. It’s a country made from regional cultures, with countless different dialects, accents, and culinary traditions. This is really central to the notion of Italian identity.

Being Italian is often times much more related to being Milanese, Sicilian, Emilian (from Emilia Romagna), Neapolitan, and so on. You have a regional identity first, after which you’re Italian. That’s a peculiarity of this country. In the U.S., you first think of yourself as an American, then from Texas or Californian. For these kids, having a regional identity and being able to speak the local dialect, meant being Italians, and I wanted to illustrate that.

You also emphasize that some in-limbo individuals might seek citizenship elsewhere in Europe. The same goes for migrants, especially highly educated ones, since Italy demands 10 years of residence before applying for citizenship, among the longest waits in Europe. What effect does this have? Europe has no shared laws on this matter. There are countries where restrictions are severe, such as Italy, Greece, and some Easter European states. That makes it a European problem de facto.

In making it so hard for people to become citizen though they were born in a country or have lived there a long time means these people are being withheld the right to pursue equal opportunities. They’re being denied opportunities that European people are granted.

Italy is considering legislative amendments to its citizenship law, which while keeping the foundation of the law intact would open loopholes. Is that the answer? It’s a first step. But I’m convinced the world will eventually move towards adopting citizenship laws that, whatever they’re called, will be tied to the notion of ius soli. Getting citizenship just because you were born in a country doesn’t seem to me the answer, because a person could be born in a country but leave it two days later and never come back.

That said, citizenship shouldn’t be seen rigidly and only in terms of a parent’s DNA. Context should matter. So should the economic contribution the person or his or family makes to the country. That’s the way things are going.

Your citizenship documentary closes with a mention of Dr. Martin Luther King Jr. How did his legacy influence your work, and do you have other points of reference? Dr. King was able to unify different positions and factions. In 2012, it was about the Italian left and right trying to produce a law together while keeping extremists out of it. For something like that, you need bridge-builders, and King was among them.

My points of reference have always been tied to civil society, not necessarily modern society. It can even be the Roman Empire. Paradoxically, the theme of inclusion was relevant even 2,000 years ago, which makes sense given Rome’s territorial expansion. In terms of civil rights, some Roman law was progressive than today’s. I don’t say this a lot because the Roman Empire was a very violent place. But I’m Italian. And yet 2,000 years the Roman Empire was Italy. That an ancient society could allow for such a level of social inclusion highlights today’s paradox, proving humanity is made from moments of progress, and moments when, sadly, all seems to move backwards.

What are you working on now? I’m looking into the life of a musician named James Senese. He was born in 1945 to an African American soldier, James Smith, who fought in Italy, and a Neapolitan mother. He grew up in Naples and learned to play sax. It’s a perfect story to help explain what it means to be Afro-Italian, or Afro-Neapolitan, the idea of leading a life based on having more than one identity. It’s a documentary about a resilient man. It’s also a story that extends well past Naples and spills out into the world. Senese’s history is what today’s world is about. It’s a story that deserves to be told.