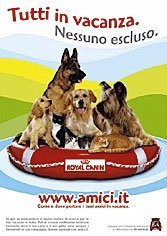 o amici, non parti, reads the Amici ad with a cute Labrador poster dog on a billboard just outside of Napoli Centrale train station. Bella huffs at it approvingly, misspelling aside. Since I adopted her in 2003, it has been her motto. Now, she’s about to add Ischia to the list of many cities she has visited since we were joined in adoption bliss.

Taking Bella everywhere has not been my goal. It’s simply a result of owning a pet and not always relying on friends or pensione to take care of her while I travel. As I’ve hinted before, traveling with a pet in Italy can be easy. The work is finding a caretaker or pensione trustworthy enough for you to leave your beloved pet for a days or weeks.

What’s my point? After all, fall is on its way; summer’s over. Boarding your pet isn’t an issue. Your animals were well taken care of and are happy (ish) to see you.

Knowing that this article is devoted to my dog, you are probably waiting for me to write about my adventures with Bella at the Festa di Santa Rosalia in Palermo where we met the talking half-man, half-dog.

But let me backtrack. It’s too important not to. We’re on our way to Ischia, thinking “No amici, non parti.”

Over 100,000 dogs are abandoned in Italy every year, along with several thousand other animals. The majority (60 percent) are former beloved house pets cut loose over the summer by families headed for vacation spots.

This should sound familiar as a result of a public awareness campaign that included posters (like the Amici billboard) and reports in national magazines, newspapers and on television. Or perhaps they are well-known because dumping your pet is as Italian as pizza and spaghetti. “Oh the horror, Italians abandon animals,” I write sarcastically, since it is not a novel technique invented nor perfected in Italy. In fact, sometimes I think we just ignore it better in the United States.

Who knows, the campaign may have actually stopped some lazy owners from dumping their pets. Maybe this summer’s numbers, when counted, will have dropped. But the numbers are still there. With that in mind, I won’t barrage you with horrible abandonment stories of kittens left in sealed, plastic bags or malnourished dogs lying on the side of the road who, if cleaned up and fed, would be fine examples of pedigreed canines. I won’t tell you grimly about the animals that will be killed because no one has a better idea what do with them.

No, I am just going to ask you to think about adopting a pet, with the same consideration you give to the start of the new school year/new job/new haircut/new boyfriend. And I am going to make it easy. Make it a September resolution.

Five Reasons Why You Should Adopt a Pet (aside from the obvious):

Adopting is like On Line Shopping: Pet finder services for animal adoption exist in a number of countries. It’s like shopping on Amazon, eBay, Yoox, Netaporter. In Italy, see amici.it — you can browse photos and histories.

Adopting is Trendy (See no. 1): If you do it, it will be cool. Soon, all will want to adopt just to imitate you. Get the hint?

Adopting Can Help You Get a Job: If you’re looking for a job, adopt a pet. Why? The dedication you devote to your animal will discipline your job search. Soon, you’ll find yourself swamped with offers.

Adopting Will Get You Dates: (You were expecting this.) While visiting adoption centers, talking to vets, going to the dog park, something is bound to happen on the romance front. Or do what I do — April Fool’s Day marks Bella’s first day with me. Every year, we celebrate with champagne and biscuits, and our good friends — Zambi and Drexall.