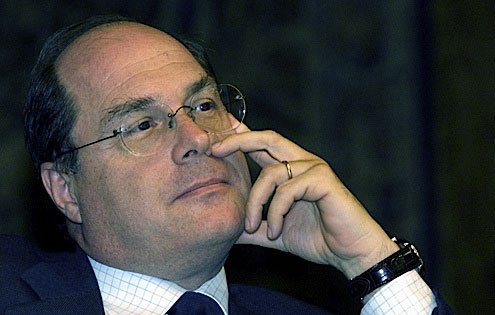 Antonella and Benedetta Cappon in 1980.
M

y favorite shot of him dates to December 31, 1999. We ran into each other by accident. I was visiting from Prague. He was at the hotel with his wife, celebrating the incoming millennium. It was a bitterly cold night in Rome. We lasted only a few minutes on the Minerva roof before escaping downstairs, the sound of fireworks penetrating the hallways.

I have always loathed favoritism of all kinds. I squirm at compliments and hide from society. I want always and only to accomplish a full day’s work. My position, unreasonably stubborn at times, puts me at odds with the more lubricated parts of Roman culture.

For this tendency of mine I respect him all the more.

We met in the summer of 1974 — perhaps a year earlier; my memory trips on distant specifics. My mother, wanting at all costs to attach me to Italian life, rewarded me with friends of friends. He was among them, so was his wife-to-be.

She, Antonella, of Naples stock, was — and is — outspoken, effervescent, full of energetic generosity. He was always more tranquil, pensive, a student of the classics, of history, a lover of his grandfather who told stories about the Italy of World War I. We were two serious boys with too-often melancholy faces. But we also knew to smile.

The early smiling came on the boat off Monte Argentario. He’d tack around Giglio and point further out toward Ginnutri. In those days, the Argentario islands were mostly without running water and low on electricity. Fancy ports were few. In the distance, he said, lay Montecristo. These were dreamy little voyages. I marveled at his pretty Italy. I also marveled that he didn’t mind getting his hands dirty, big hands on jars of dark engine fluid: I called the oil sangue di gatto, and we laughed.

He and his brothers worked hard. Their university grades were high, their drive manifest. Their father Giorgio set the mark — he’d headed IMI (Istituto Immobiliare Italiano) — and the family expected no less than excellence. That generation, the middle children between hardship and incipient affluence, pushed the work ethic to its devoted extreme. It curried no favors. It was aggressive — too ambitious to some — but cut no corners. It depended on intelligence and education filtered through faith.

I have another photo, this one from 1980. In it, Antontella embraces her firstborn daughter, Benedetta. Stefano would follow. They are now in their mid-20s: decent, incandescent, and smart young adults— the best of Italy.

My mother’s volunteer organization, shaken by her sudden death in 1988 death, was gradually picked up and dusted off by Antonella, who’s never met a good cause she can’t improve. She can make 11 phone calls at once while holding a dinner party and attending Mass. My mother adored her.

In turn, he climbed the ranks, cleanly always. He joined Italy’s 1980s technocratic revolution, young men with can-do sensibility eager to bring Italy in line with Europe’s more linear sense of efficiency. Not a glitzy road, political technocracy, but it was eased by IRI — the Italian reconstruction administration — and Romano Prodi (who whatever his shortcomings yields less to ideological pretenses than most Italian politicians and whose academic background gives him an evenness of spirit). Prodi liked and respected this young man of untainted promise.

Not once, though, did he lobby actively for rewards— even when Prodi, prime minister in the mid-1990s, could possibly grant them. Instead, he worked hard, lectured, learned languages, read. Always, he was kind.

Then, in 2001, he caught what seemed like a break. The government of Prime Minister Massimo D’Alema recommended him (indirectly, because so much here is indirect) to run RAI, Italian state television. He became its CEO, or direttore generale, early that year.

But the center-left was already foundering. Though uniformly admired, he soon found his hands tied. Less than a year into his stint, Silvio Berlusconi charged back into parliament and tore down most of what he saw, a partisan Godzilla in the big city. He took down my friend, inflicting abrasions big and small.

It hurt to watch, to hear, even from afar, from Prague, because I knew this man as among the most decent and competent in Italy — and the most self-effacing. Others of his ilk had made it big by going private, Corrado Passera for example. The gifted Passera, far slicker, was first in charge of the post office system, then a major bank. Before that he’d managed a major weekly. He let things wash over him, keeping political shivers at bay by staying out of full harm’s way.

But Passera’s tendencies weren’t those of my friend, whose gamesmanship was more pragmatic. He refused to work the back alleys to maintain position. After RAI, he took a well-paid holding pattern job running CONSAP, which essentially sells off state companies. It frustrated him, though he was too proud to say so. He knew he could do more. But he never overreached.

Now, a patient half-a-decade on, the circle’s come gladly round.

Claudio Cappon just got his old job back. He’s the new CEO of RAI. It’s a massive assignment. Call it politics, call it what you will.

I call it deserved redemption, a nice Italian story when so few are manifest: right man, right job, right pick.

Among friendship’s greatest reward is how it elicits pride in the success of those you care about, and how it encourages you to believe that once in a while good people do in fact get their just due.

Particularly, and fundamentally, when their offering to the country is the purest and best form of nationalism: talent.