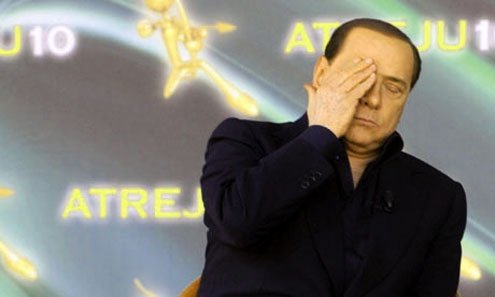 Are you crazy! I'm enjoying myself."
W

hatever woe ultimately befalls Italian Prime Minister Silvio Berlusconi, assuming such a fate lies in store, his ability to redirect hounding shows not only an uncanny resistance to regret but also a view of power that transforms besieging into a form of legitimacy.

His resignation demanded yet again (it now happens weekly, daily, hourly), he memorably responded: “Are you crazy! I’m enjoying myself.”

Enjoyment is only a slight overstatement. Berlusconi’s political skin is rhino-like. Most fraud-oriented probes into his media and business dealings petered out years ago, sandbagged or stalled, leading frustrated magistrates push their wiretapping into the sexual underbrush unabashed Berlusconi has inhabited since the 1980s.

Two years ago, as Berlusconi celebrated newly-acquired immunity, judicial insiders slowly began leaking wiretaps affording a prurient look into a Caligula-like array of prostitutes and whores, which by Italian standards was predictable, if not amusing.

Until teenagers crept in. Even the slightest whiff of such a potion — sleeping with teens, that is — would instantly dislodge most Western global leaders.

Attack him and he attacks back. Parry and he parries back. His steadfast occupancy of a parallel morality confusingly unhinges the distinction between aggressor and victim.

Instead of Nixonian dissembling (“I am not a crook.”), he works tirelessly to discredit a largely faceless Italian judiciary that has long been an estate unto itself, its probative powers as politically tinged as executive management. The wiretap issue is particularly sensitive, justified to keep the underworld in check but often used to partisan ends.

Since Italians loathe monitoring, swear by conspiracies, and have little patience for any kind of intrusion into family affairs, including affairs themselves, they’re forced to concede that vulgarity works both ways. Investigators are not always princes without price-tags. And since Italians also understand the meaning of vendetta better than most, or think they do, few rule it out as a motive to humble the powerful.

Their response to sexism, by contrast, is undeveloped. Powerful men are assumed to populate harems, or aspire to them.

What a powerful man cannot do is lose publicly face, which Berlusconi knows. He trivializes criticism to focus attention elsewhere, mostly toward the judiciary whose anonymity can be seen by some as cowardly. Only once in recent Italian history did the judiciary produce palpable ID tags, during the Clean Hands probes of the early 1990s, and resulting public support bolstered prosecutorial authenticity.

That Berlusconi’s enemies are Kafka-like only pads his self-assuredness and gives his rejection of apology reverse credibility. It also gives him an amoral leg-up on those who insist that he should surrender to mortification.

His conduct is anything but postmodern laissez faire, its roots instead in a preternatural Italy governed by princes and barons, cardinals and landowners, privileged figures who associated power with endurance and found frailty more vulgar than murder.

Humility only found its way into Western politics after World War II, as a form of trickle-down regret for all things authoritarian. But Italy’s regret was tempered by ambition. The Vatican-stamped Christian Democratic party behaved politely but clung to power through any available means.

Insisting on such strategy is fatal to most politicians, who inevitably grow either exhausted or remorseful, or both. Once again, not Berlusconi. His flaw-management is near-perfect. The balder his alleged degradations, the more he cleverly he dials up his retorts.

The “great time” remark was no accident. He not only refuses to wilt but also pulls out a fiddle, which if nothing else proves that Italian-style true grit has a foot in the grotesque.