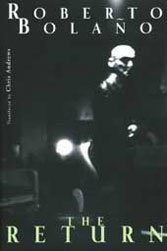 The Pacific absorbs useless noises. Jot it down. The night is long and the tales are many. This is Bolaño playing after-hours raconteur, the Barcelona drifter who slips into stories about gangsters nicknamed Chulu and Billy the Kid, about Andalusian Fascists who owe their lives to soldiers mishearing “cunt” as “art,” about squabbling Chilean detectives who nostalgically recall rape and torture, about lifeless lovers with a hankering for instant mashed potatoes and soccer players enmeshed in Voodoo. The gregarious stew of the overheard yields barroom sagas that have a one-for-all feel, like a chant occasionally interrupted by startling soloists. There’s Clara the beauty queen who when depressed sees rats and Italian sex diva Johanna Silvestri who waxes nostalgic about L.A. and her sickly porn partner while talking to a Chilean visitor who wants details about Pinochet-era butcher on the lam. “We’re all ghosts,” she wants to tell him.

The flesh trade won’t shut up. Silvestri’s wistful recollections of cocks and comings are followed by those of an assassin named Lalito Cura who tells of the days when his aunt and pregnant mother worked in the Columbia porn industry for a shrewd German who specialized in lacto-porn. “I want to believe that when those cocks went as far into my mother as they could, they came up against my eyes,” muses Lalito. And later: “The mystery of life in Latin America. Like a little bird charmed by the gaze of a snake.” Then meet Max, picked up, fucked and gagged by a woman who, true to the title, is a murdering whore (“As the gangsters say, it’s nothing personal, Max…”) Nothing is vulgar, everything is criminal, no stain washes away, all has a foot in the afterlife.

The opening sentences of the title story speak for Bolaño’s Ouija board: “I have good news and bad news. The good news is that there is life (of a kind) after this life. The bad news is that Jean-Claude Villeneuve is a necrophiliac.”

There’s no running from spells cast by a dead Chilean, the most haunted blessing a reader could hope for.