The Restraint of Beasts 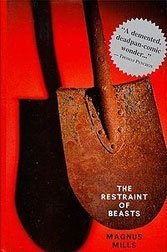 If ever a contemporary novelist got to the Tao of wry, it’s Mills in this sly first novel. Consider what he gives himself to work with: backwoods Scotland, three fence-builders, two of them beer-loving slackers, and a series of literally dead-end projects. There’s the foreman-narrator, a laconic Brit, Tam and Richie, the dumb and dumber workers (“wild-men, head-bangers, with long Viking hair…”), and Donald, the impassive company owner. The threesome’s role in life is going job-to-job building high-tensile farm fences for keeping animals hemmed in. “All the fences had to be straight. This was our mission.” Impossible, as it turns out.

Mills, a mad genius, makes no excuses for his premise, or his dim-witted men: “This was rural Scotland. There was nothing else to do.” It’s the how of the story that matters. In one job, for a Mr. McCrindale, a hammer handle flies loose and Mr. McCrindale is history. “Tam looked at Mr. McCrindale and then turned to me. ‘I didn’t mean to do that,’ he said.” Deadpan is an understatement.

Ah, but McCrindale is only a harbinger. In “exile in England,” which to say a hundred miles south, more oddities pile up, including a little work on the side for bizarre butchers who don’t really know how to fence.

Mills captures the spirit of medieval ballads, which scrounges for humor in simple things, because once the simple life was the only provider and purveyor of comedy. When the fence-straighteners are not in Upper Bowland they’re in Lower Bowland, though the death toll still mounts. Here then is a novel about accidentally homicidal fencers who yawn a lot and have a dubious regard for personal hygiene. Later on, they’ll be called upon to install electrified fences, which Donald calls “the final solution to the restraint of beasts…” But the wild things are in the men, not the beasts.

Blue-collar Magnus Mills, once a fence-builder and bus driver, belongs to a high order of black comedians, the kind that refuse to take themselves too seriously and stick to hijinks conjured up by the day-to-day.