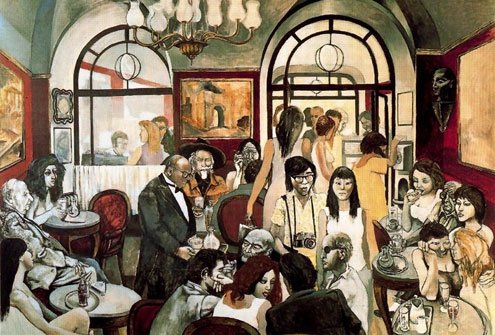 Detail from Renato Guttuso's 1975 portrayal of Caffé Greco.
I

pictured myself writing articles such as this one hunched over my laptop in a cozy corner table of a lovely little Rome café, the steam from my cappuccino caressing my screen for hours on end while I occasionally gazed up at my beautifully Belle Époque surroundings. I did not, however, picture myself wandering the streets of Rome for extended periods of time lugging said laptop in search of said café — one which, incidentally, wouldn’t charge me €6 (or more) for that damn cappuccino. Nor was I prepared to make do in one of the ubiquitous bars — unimaginative places where poetry is found only in the delicate manner a heart is crafted in frothy foam.

As a former New Yorker and frequent traveler to European cities, I assumed Rome was a city like most others, certainly not lacking in caffeine-friendly retreats where writers, thinkers, artists and those otherwise occupied with solitary pondering could wile away the day.

I thought of the legendary literary cafes of Paris — traditional centers of chic intellectualism. American coffee house havens — from the bohemian, velvet couch-laden lairs of New York’s Greenwich Village to the Starbucks on every corner from Portland to Poughkeepsie — also came to mind. I felt sure I’d find their equivalent alla Romana, with far better coffee and charming Italian waiters.

It hasn’t quite turned out that way.

Naturally, there are the guidebook standards: Bar della Pace, Babington’s Tea Room, and, of course, the oldest and most illustrious of them all, Caffé Greco. “All the famous artists, poets and writers came here; to meet, to paint, to write,” says Andrea Potenza, the maitre d’ and designated historian of the café, which opened its doors in the late 18th-century.

Greco was Rome’s first literary café — a place where savvy expatriates such as Stendhal, Byron, Goethe, Hans Christian Andersen, Shelley, and Keats recorded their thoughts. “All of the important people who came to Rome came here, from Wagner to [Giorgio] de Chirico,” says Potenza.

But after the halcyon days of Shelley and Keats, the Rome literary café scene once percolating at Caffé Greco gradually lost its steam, never to retrieve its original glory. By the Dolce Vita era, the cognoscenti were commiserating over chic aperitifs on Via Veneto. Caffé Greco’s “in crowd” switched from masters of pulp and canvas to stars of the big and small screen. “In that period, and still now, any famous people here are mostly actors, some politicians, but it is not as it used to be,” says Potenza, “Not a place for intellectuals, except for a cultural association of professors that meets here every so often.”

In fact, the most common books to be found in Caffé Greco today are the guidebooks held by tourists nursing expensive espressos and marveling at the original walls reminiscent of times past. Why is the coffee house culture so engrained in other cosmopolitan cities and once a part of Rome history so hard to find today?

Coffee culture is different in Italy. Coffee is fuel for the body and for the day ahead. The place that serves it is a pit stop — a place to refill both on black gold and on another core element of Italian culture: words. Bars are a central part of the communal aspect of Italian life; a place to catch up on gossip, discuss the day’s news, debate the latest politics or to discuss the particular merits of one soccer team over another.

There are tables for those who have the time or inclination to linger a while and extend these conversations, and even the solo patron can pull up a seat and peruse the paper, but only to load up on material for the next conversation he or she will surely start with any willing participant. Words — constantly spoken, not written, and thoughts — constantly expressed, not contemplated, are both antithetical to café table introspection.

“In Italy a man is never alone with his thoughts, always feels himself immersed in humanity.” So wrote Italian journalist, politician and social critic Luigi Barzini in his 1964 book, “The Italians.” For Italians, “the importance of spectacle” matters most. All the world is a stage, which means that one must have an audience at all times; to be alone, to save one’s thoughts only for oneself, this is not Italian.

“Italians are not individualists,” he writes, suggesting why there is no great demand for public places for personal time or private reflection. “They prefer to glide elegantly over the surface of life and leave the depths unplumbed.” Journaling is apparently not a favorite Italian pastime, and certainly not while sitting alone in a café.

Barzini’s cultural reflections help explain why, beyond a small community of expat and local creative types, there is not a greater demand for a pretty place to spend the afternoon sans companion with a good cup of coffee, a book or a sketch pad. After all, even those first great pioneers of Rome café society were not native Italians.

Thankfully, however, Barzini’s profile doesn’t apply to all his countrymen. “I wanted a space where there would be good music but also good silence; a place for friends, a place to read books, and a place to see interesting art,” says original Caffé Bohémien owner Corrado Canton. With that in mind, he opened the Monti neighborhood cafe in 2003. It has since changed hands, but that hasn’t stopped the development of a faithful clientele of students, writers, artists and lovers of the literary café. Its Baroque antiques, grand chandelier and velvet divans are reminiscent of the heyday of Caffé Greco, but the postmodern chairs, funky light fixtures and eclectic accents make it a haven for the new generation of Goethes, Gogols and Byrons.

As Billie Holiday croons in the background, the café’s location can seem somehow appropriate: Via degli Zingari, Street of the Gypsies. Maybe the great writers of the Romantic age were just intellectual gypsies bringing to Rome the best of what they knew from afar, and maybe if they were here today they would feel as if they once again had a home.

Caffé Novecento The narrow salon is a serene and airy place to idle. Grab a marble table and sip one of the many varieties of tea or coffee creations. Though more of a petite eatery than true café, it will let you be alone and at peace with your thoughts. | Via del Governo Vecchio, 12. Tel. 06.686.5242.

Salotto 42 Ideal as a comfortably chic meeting place for aperitivo with friends or for a sofa-cushion-for-one type afternoon. As the name implies, the feel is of your richer, hipper friend’s living room, stylish and relaxed. It has all the traditional coffee selections, and teas, not to mention the beautiful view of Hadrian’s Temple across the narrow piazza. A perfect location for inspired scribes. | Piazza di Pietra, 42. Tel. 06.678.5804. Daily, 10 a.m.-3 a.m.