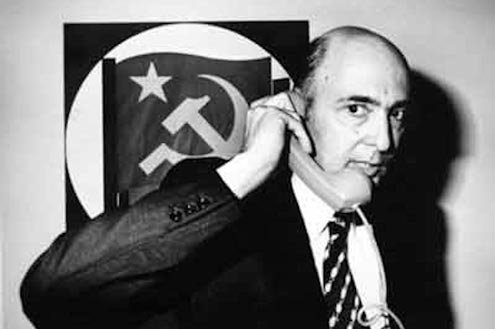 Giorgio Napolitano in 1975, when he was a leader of the Italian Communist Party.
I

n February, Beppe Grillo and his anti-government movement swept into the forefront of Italian politics with an unexpectedly impressive showing in national elections. Watching the progress of his Five Star Movement has been exciting, since it represents an open challenge to the status quo, much of it fueled by online outrage.

But day-to-day he’s proved anything but an easy figure. Resistant to compromise, Grillo chose instead to press ahead with his campaign rhetoric, attacking the institutions to which his members had been elected and insisting on a political overhaul that would, in his words, end the Italian party system. The result yielded a political stalemate that showed a less attractive side of Grillo and may end up costing him vital support among Italians in the longer run.

But the post-election chaos produced circumstances that saw outgoing President Giorgio Napolitano’s put his name back in the presidential mix and find himself swiftly and improbably re-elected to a second seven-year term. It was an unprecedented move, and a nobly unselfish one. Napolitano, at 87, has nothing left to prove.

It may be useful, as a new Italian government comes into focus, one led by former Democratic Party no. 2 Enrico Letta, to track Napolitano’s history, a fascinating one given his now proven ability to unite left and right.

Born in 1925 in Naples, he joined the Communist Party after World War II, and was elected to parliament in 1953. Napolitano gradually acquired a reputation as a Communist moderate (though the party was always proudly detached from Soviet priorities). In 1956, after a personal turn-around, he was a key figure in his party’s disapproval of the Soviet intervention in the 1956 Hungarian Revolution, a move it first supported, buying into the Moscow view that is was part of a “counter-revolution” to preserve world peace. He would later say his party’s decision to go along with the crackdown left him uncomfortable.

Things were different in 1968, when Napolitano and his Communists criticized the Soviet suppression of the Prague Spring and its later invasion. As the party began squabbling about the extent of its ties to Moscow, Napolitano moved further to the right, a faction of the party that supported European integration.

It was then that his career took off. In 1978, two years after the party came close to winning a majority in national elections (falling slightly short of the Christian Democrats), he became the most senior Italian Communist official to visit the United States, where he delivered lectures in fluent English. This cemented his reputation as a moderate. Later, former U.S. Secretary of State Henry Kissinger would call him “my favorite Communist.” Napolitano’s rejoinder: “Your favorite former Communist.”

A staunch Catholic, Napolitano 2006 presidential bid was endorsed by the Vatican’s official newspaper, L’Osservatore Romano. Soon after, at age 80, he became the first former Communist to hold the presidency.

His tenure wasn’t easy. In 2008 then-Prime Minister Romano Prodi, governing with a tiny majority, lost a vote of confidence and was forced to resign. Back came former leader Silvio Berlusconi, whose third term as prime minister was punctuated by one scandal after another. In November 2011, with Italy in dire financial and economic straits, Berlusconi resigned. Napolitano quickly appointed former EU Commissioner Mario Monti, whom he has just appointed to the position of senator for life, as prime minister-designate, asking him to form a technocractic government, which he did.

Napolitano’s bold and controversial move — Monti was an unelected figure — put him under a media microscope. The role of the Italian presidency, seen mostly as ceremonial, was suddenly expanded, with Napolitano seen as a pivotal figure.

His importance became even more critical after February 2013 national elections, two months from the end of his term. The result was a hung parliament and weeks of acerbic deadlock. Five inconclusive ballots for presidency showed Italy at its most vulnerable. Democratic Party chief Pier Luigi Bersani, angered at his party’s failure to rally around the nomination of Prodi, stepped down, deepening the woes.

At that juncture, both Monti and Berlusconi appealed to Napolitano to make a move, which he did.

President once more, he made a remarkable speech about collective responsibility and then named Letta, a dark horse, to form a government, which he has. Most notable about Napolitano’s speech to parliament was that all gave him a standing ovation, minus Grillo’s still disenchanted faction, which sees even the aging president as a member of Italy’s dreaded “caste” system.

So far, Letta has been greeted with interest, both internally and overseas, but Napolitano role may be far from done. He’s said he’ll continue as long as he’s physically able. No doubt world markets are stocking up anti-aging therapies to ensure he is.