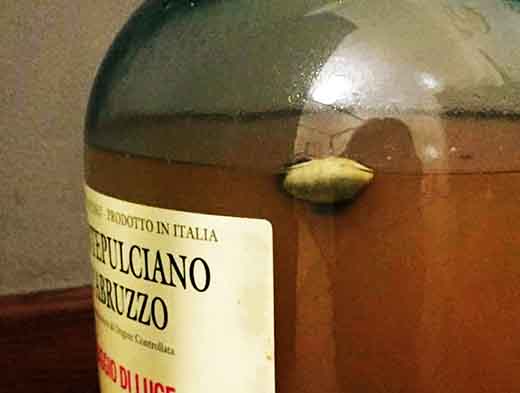 That Tuscan moonshine at the foot of the bed...
I

t’s extremely difficult for me to broach the topic of this month’s column.

It has to do with the five-liter bottle of liquid that is currently sitting at the bottom of my bed and the series of, perhaps, misguided, life choices that led to it.

Maybe I should just come right out and say it.

I’m making moonshine. Or apple-and-pear, cider to be precise. And it is not working out as well as I’d planned. Every night, I fall asleep with the street lights reflecting off that pale glass container.

I listen for the soft hiss of the red and white airlock failing and imagine fermented fruit vapors oozing from the spout and liquefying as they hit the -10°C air of our bedroom at night.

Giulio and I refuse to turn on our euro-guzzling radiator and have survived the Italian winter with nothing more than a circa 1970s mustard-colored blanket that I stole from my childhood home and smuggled halfway across the globe without my mother noticing.

Ironically, the cider sits in my bedroom because it’s the warmest spot in our otherwise cavernous and inhospitable abode.

I awaken in the morning with that bottle in my line of sight, shrouded in the harsh grey shadows of our terrible mock French Restoration canopy bed. Our master bedroom looks out onto the brick wall of the bank next door. There is no natural light, something I am infinitely grateful for as I stare at the two distinct layers of my cider. I’m no homebrewer, but even I am starting to wonder whether the liquid should have separated (or should I say putrefied?) into a cloudy pond-scum sludge topped by a thin piss-colored juice.

I’m making moonshine. Or apple-and-pear, cider to be precise. And it is not working out as well as I’d plan.

And yet I find myself on my knees with my nose pressed to the glass almost every night. I’m studying this bottle with a fierce intensity, looking for signs of mold. Is it there? Forming around the edges of that sad, insipid little green cardamom pod that floats on the surface?

Once as a child, I poured all the leftover oil and vinegar from my salad into my sister’s fish bowl just to see what would happen. Her goldfish died of what I presume to be vinegar poisoning and that cardamom pod has become, almost 20-years later, my own personal Telltale Heart. Its beady non-existent eyes accusing me of my past crimes as I try to watch the latest episode of Suburra.

I knew I shouldn’t have added that lactose. Who has ever heard of milk being added to cider? I probably should have washed the bottle better. Almost 48 hours ago, Giulio removed the translucent plastic cork and the sour scent of failure filled the room.

He wanted to shake the bottle.

I didn’t think it was a good idea.

He did it anyway and the muddy, murky layers combined for a brief moment before separating more decisively than before.

The thing is, I really like cider. I developed a taste for it like I develop a taste for all the fads of my generation, 6-8 months after everyone else on one of my biannual trips back to Melbourne.

When I was first in the throws of its alcoholic embrace, I bought 18 bottles from an Australian Aldi and wrapped them in bubble wrap, filling the entire base of my plastic hardtop suitcase. Only four of them broke and stained my summer wardrobe, but I enjoyed every last bottle of my discount German cider with a doomsayer’s sense of satisfaction on the eve of the apocalypse. I refused to share them with Giulio. I lugged them across three continents and ruined my favorite cotton dress for them. He can drink Chianti and shut up.

When those were finished, I scoured the supermarkets for more. I never saw a bottle of cider in any of the Italian supermarkets I canvassed in those first frenetic months. Four different types of Martini? Yes. A transparent bottle of 70 per cent proof lighter fluid for 7 Euro? Yes. Cider? No.

Fast forward four years and a 35-Euro homebrewer’s kit later and you’ll find yourself hovering over my shoulder as I beseech a bottle of spoiled juice to turn into cider.

That rancid liquid will not be denied. It whispers: ‘You are the sort of 30-year-old woman who DIYs her own foodstuffs.’

When I look at that bottle, I see all the left-hand turns I have made. The little decisions that seemed like nothing at the time, but somehow, when added all together, brought me here, in fluffy slippers and four jumpers on a Saturday night in a tiny Tuscan town where cider doesn’t exist and brunching doesn’t exist and cinemas and clubs and concerts and all the stupid frivolous things that define your life when you’re in your 20s and early-30s don’t exist. And bacon. God, I miss bacon.

I’m making my own bacon as we speak. It’s sitting in my fridge seeping liquid salt, sugar and porky moisture in what would be my vegetable crisper, if Giulio and I ever ate vegetables.